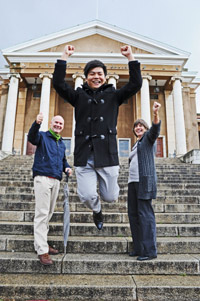 High flier: Yu-Hsiang Lu came third (with honours) in the 2011 South African Institute of Charted Accountants (SAICA) Part 1 Board Exam, one of two UCT students placed in the top 10. He was congratulated by Prof Mark Graham (left), HoD of the Department of Accounting, and Prof Alex Watson, Head of Learning and Teaching in the department.

A significant step has been taken towards the transformation of the accounting profession, reflected in the release on 27 May of the 2011 South African Institute of Charted Accountants (SAICA) Part 1 Board Exam results.

UCT recorded a 15% increase in its number of successful candidates and an 89% pass rate for black African students (national average 55%).

"These pass rates (both UCT and national) show a slight improvement on previous years," said Graham. "A total of 287 (2010: 249) UCT candidates passed this year. This translates into a year-on-year increase of 15% in the absolute number of successful candidates."

UCT had the highest absolute number of passes in the exam of all the universities in South Africa, other than UNISA. A stand-out feature was the success of UCT's black African, coloured and Indian students.

Two UCT students came in the top 10: Yu-Hsiang Lu was third (with honours) and Michael Hunt was 10th. Lu said: "there is no real secret to this success - what it comes down to is consistent hard work and a passion for what you do".

Furthermore, all 11 of UCT's Academic Trainees were successful.

During 2010 UCT ran a programme, sponsored by Thuthuka (the transformation programme of SAICA) for 30 students repeating the Qualifying Exam. The pass rate for this cohort was 70% (national average 35%). Of the 13 Thuthuka students who wrote the QE for the first time this year, 10 were successful.

Graham lauded his staff and support staff, colleagues in the Education Development Unit (EDU), as well as those who teach on the Postgraduate Diploma in Accounting, for the achievement.