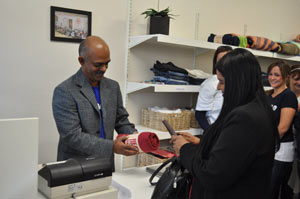 SHAWCO may be a charity organisation, but lately its new projects are focused on not only helping the community, but helping the organisation to rely less on philanthropy and more on its own means.

An example of this is the recently launched Rags2Riches project, a second-hand clothing shop in Mowbray.

SHAWCO director Varkey George explains that the project "falls within the mandate of improving the lives of the people in the Cape Metropole" by providing affordable clothing and creating employment for "middle-women" who buy wholesale from SHAWCO to resell in their communities. But Rags2Riches also generates income for SHAWCO.

"We normally receive funding from corporates and donors," says Rags2Riches project manager at SHAWCO, Eltena Dirks, "and now this initiative will be an added income. All profits made in the shop go towards the greater organisation."

"This is a direction we embarked on for two reasons," says George. "One was after the harrowing experience of not having funds and having to retrench staff in 2003. Secondly, we need to send out students who can implement community development projects as well as sustain them financially. SHAWCO needs to provide opportunities for good-hearted students to become pragmatic and use business principles to solve social issues."

Rags2Riches is one of SHAWCO's crop of "cash-cow" projects. Another is the SHAWCO Saturday School, initially funded and now also receiving fees from middle-income scholars. The SHAWCO Community Transport Services uses the organisation's buses to generate income by providing transport services to churches and schools during downtime. In 2010 SHAWCO also launched a raffle, which generated R 25 000 in its first year.

"A seed has been planted," says George.