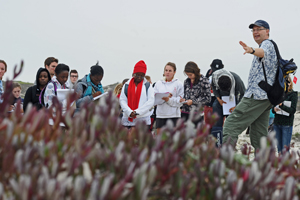 Nature's way of changing is not always apparent to us. A recent geomorphology field excursion by Dr Frank Eckardt of UCT's Department of Environmental and Geographical Science examined the road alignment of Baden Powell Drive, the scenic route that hugs the False Bay coast a little too tightly for comfort.

It's so close to the waves that sometimes it literally becomes a beach road. Eckardt explains that because of the naturally shifting sand, dunes can form in the middle of the tar in a matter of hours. The road is narrow and unlit, so it can pose a serious hazard to traffic. In some sections it veers so close to a cliff that it might slip into the ocean in a few years.

"Baden Powell Drive was built between a belt of shifting dunes and a shoreline," says Eckardt. "You have to question the wisdom of that decision. "The road serves as a lesson for Eckardt's third-year students. In a field trip following its path from Muizenberg to the Wolfgat nature reserve, students collected sand samples from several areas and examined historic air photos. This is the first step in a research project documenting contemporary environmental controls and processes as well as determining historic changes to the coastal landscape over the last 60 years.

The shifting sand has made its mark on residences, seaside recreational structures and the road itself.

Soil samples were collected for examination of organic content, as an indicator of stability, and grain size and shape, which give a sense of sediment mobility. Vegetation cover and calcium cement content were also noted. A GPS device was used to place sample locations into the wider context.

"Student group work will generate a fair amount of data to be shared and analysed by the class," says Eckardt, "so this also serves as an important exercise in managing environmental data."

"In some areas, naturally shifting landscapes are held frozen in time by vegetation," he explains. "Alien vegetation is especially effective in preventing dunes from encroaching on development, but this can prevent beaches from being replenished. An example of this is Llandudno, where the beach sands can be starved out of existence."

It's an ongoing battle. Misplaced infrastructure demands constant maintenance - a cost at the expense of people as well as the environment - that could easily be avoided.

"Coastal developers who insist on building on the dunes are simply not taking reality into account," says Eckardt. "Environmental problems can be associated with climate change, but sometimes it simply amounts to too many people doing stupid things in the wrong places."

But if developers know the long-term consequences, why build in these areas?

"Profit," answers Eckardt. "Developers make their money and leave. And soon people are wondering why they have boulders on their front stoep." This is the case with some properties in Betty's Bay, where coastal mass movement is not uncommon.

Eckardt argues that the world's focus on "low-frequency, high-magnitude" events, such as floods and tsunamis, comes at the expense of less media-friendly phenomena, such as soil erosion, disingenuous development and dying sandy beaches.

"Even slow, creeping change can be hazardous," he notes. "We need to be more thoughtful with zoning, and give nature the respect and space it demands."