Sports scientists put heads together to explore the brain 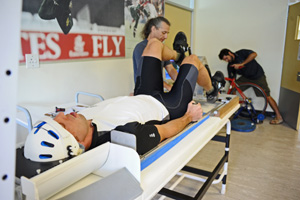 Along for the ride: Cyclist Ian McClarty is strapped into the MRI simulator, while Dr Fabien Basset of the Memorial University of Newfoundland (left, in blue) and Eduardo Torres (at back) set up the rest of the equipment, all part of a study to explore brain activity during exercise.

Until someone finally markets a portable, helmet-sized MRI scanner - and, yes, there are people trying to do just that - picking the brain of a sports person in situ is going to be a long time coming.

The main hiccup is that in most sports activities, even the non-contact ones, the head bobs and sways around too much. On the other hand, an MRI scan of the brain requires that a subject's head remains near motionless.

The technological hurdle seems insurmountable, then. Or so you would think. Recently Eduardo Fontes, a doctoral student from the University of Campinas (UNICAMP) in São Paulo, Brazil, spent some weeks at the Medical Research Council/UCT Research Unit for Exercise Science and Sports Medicine (ESSM) overcoming this snag.

After first hearing of the work of Professor Tim Noakes, ESSM director, on the relation between the brain and sports performance and how (and which) cerebral areas control exercise, Fontes was keen to travel to Cape Town to work with Noakes. And he came prepared.

In the hopes of taking a brain scan of a cyclist performing at peak, Fontes and his father, a mechanical engineer in Brazil, had put their heads together. They designed and built a makeshift contraption that allowed a cyclist to lie flat on his back, head kept stock-still in a helmet fixed to the bed of the scanner, while still being able to pump furiously at a set of pedals connected to a cycling ergometer. (Watch a video of the gadget in use).

The machine would allow the researchers to take an MRI scan of the cyclist completing a standard if punishing VO2 max (aka maximal oxygen consumption) test. This test measures the maximum amount of oxygen that a person's body can transport and utilise during a bout of exercise where intensity is gradually increased over time.

To get cyclists used to the head restraints and the sensation of cycling while supine, all this within the claustrophobic confines of an MRI scanner, Fontes called on the help of Charles Harris, chief technical officer in UCT's Department of Human Biology. In his workshop Harris constructed a mock-up of the MRI bed and scanner, and made sure the final cycling apparatus was scanner-friendly (no metal bits, for example).

Fontes ran the full tests and scans with seven well-trained, competitive cyclists. It took the cyclists a session or two to get used to the unusual set-up of the simulator, Fontes admits. "The first impression when they see it is, oh man, I won't make this. But after we improved their comfort - their head and their positioning - they're fine."

The prep work with the cyclists on the simulator - including full VO2 max tests - took place at the ESSM facilities at the Sports Science Instittue of South Africa in Newlands, while the MRI scans were done at the Cape Universities Brain Imaging Centre on Stellenbosch University's Tygerberg campus.

The project is breaking ground for the study of the brain during physical activity, and sets the tone for a string of possible new intervention studies to follow-up on this pilot work, explains ESSM collaborator and postdoctoral fellow Dr Elske Schabort.

"Because of the difficulty of the project, technique, equipment and methodology, limited information is available in this area of exercise science research," says Schabort, "and therefore the opportunity to be among the first to initiate such novel investigations, will allow great progress in our work to try and understand and describe the involvement of brain and central nervous system during exercise and performance regulation."

Now back in Brazil, Fontes is making a start on the analysis of the data. Firstly he and a team of international collaborators at ESSM and UNICAMP will calculate the specific demands of the atypical cycling position, and then cross-check that with what they find on the scans. The first results should be out early next year, says Fontes.

But the very early findings, at least, suggest that the results from the simulator and MRI scans were very evenly matched, confirmation that the simulator did its job. Now comes the brain-teasing stuff.