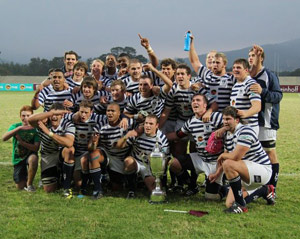 Salt in the wounds: The Ikey Tigers celebrate their thrilling - and rare - intervarsity win over Stellenbosch.

For the moment it would appear that the Ikey Tigers have the wood on the Maties, as the sporting saying goes. Not just did the UCT team usurp the Varsity Cup from their Stellenbosch University rivals, but now the Tigers have rubbed salt into the Maties' wounds with a thrilling 28-19 win in their annual intervarsity clash in Stellenbosch on 14 May.

Understandably the Tigers are overjoyed. These intervarsity wins are as rare as, well, intervarsity wins; it's only UCT's third in 30 years, according to the unofficial record keepers, and the first since a 2004 triumph (that's official).

But this one is especially satisfying. The Tigers had to claw their way back from a 9-19 half-time deficit, after wasting - as they've done so often over the years - their dominance of possession and territory.

In turn, the Maties turned every scoring opportunity into points, touching down three times. "Maties was very forceful in their approach, and really applied the pressure," reports Gavin Sheldon, UCT Rugby Club manager.

UCT managed to turn things around in the second half, though, closing down the Maties players and denying them any running space.

The Tigers team sheet reads differently to the one so familiar over the Varsity Cup, in part because of injuries. But again it was flyhalf Demetri Catrakilis, top scorer in that tournament, who was UCT's go-to guy. Catrakilis scored 23 of the team's 28 points, slotting over seven penalties and converting UCT's lone try, scored by another Varsity Cup standout, Therlow Pietersen, who came on as a substitute.

UCT now lies third on the Western Province Super League, behind Maties and Victorians (the other Stellenbosch outfit).

There's still some work to be done, however, if they want to qualify for the National Club Championships. All three university teams have played at least one game more (three or even four in some cases) than other contenders; in an attempt to clear students' diaries for the upcoming exams, the sides have crammed midweek games into their fixtures as well.

So the likes of Durbanville-Bellville, Hamiltons and even the unpredictable SK Walmers, all sitting in the bottom half of the log, could well still catch up.