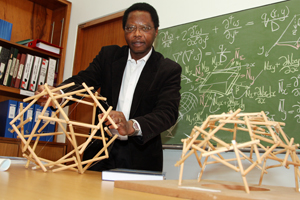 Building blocks: Prof Alphose Zingoni has been elected as a fellow of the International Association for Bridge and Structural Engineering.

Alphose Zingoni, professor of structural engineering and mechanics in the Department of Civil Engineering, has been elected as a fellow of the International Association for Bridge and Structural Engineering (IABSE).

The IABSE boasts about 4 000 members in 100 countries. Zingoni joins an elite group of only 150 IABSE members worldwide who have been named fellows.

The fellowship recognises his significant contributions to the field of structural engineering on the world stage, through his own research and scholarship - which enjoys considerable international recognition by peers - and the prominent role he has played to promote the exchange of the latest findings among researchers.

Over the past 15 years, Zingoni has been investigating the behaviour of shell structures, and his 1997 text, Shell Structures in Civil and Mechanical Engineering, is now used in more than 60 countries. He has also pioneered work on the use of group theory in the study of problems in structural mechanics.

Zingoni is modest about this latest recognition, and acknowledges UCT in providing an atmosphere that is conducive to research and scholarship. He's hoping to do the same for the next generation of engineers.

"One of the responsibilities of fellows of the IABSE is to act as role models to the younger generation, and encourage them to excel, and I hope that this award will give my students added inspiration," he says.