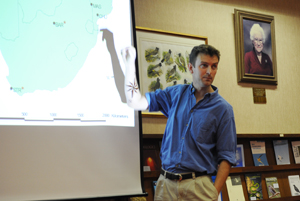 The Percy Fitzpatrick Institute of African Ornithology, a Department of Science and Technology National Research Foundation Centre of Excellence, hosted a research seminar as part of its AGM on 8 April.

In his opening, Fitztitute director Professor Phil Hockey reflected on the years since the centre's inception.

"Becoming a centre of excellence means you must change the way you think. It's not just about being a scientist or publishing good journals; you have to impress some rather serious people. It comes down to output, impact and meeting key performance targets."

So, how are they doing? In 2010, the international impact of life sciences research at UCT was rated 12th in the world. Moreover, the centre's publications' impact factor - a measure of the frequency with which the average article in a journal has been cited in a particular year - ranges from 3.5-10. That's incredibly high if you consider that 99% of the world's research journals have an impact factor of less than one. One of its coveted exports, Roberts Birds of Southern Africa, has, at last count, been cited over 300 times.

Research addressed at the seminar included these titles: Avian influenza and the movement ecology of African ducks, Feeling the heat: how climate change affects Kalahari birds. and Conservation genetics of threatened endemic seabirds.