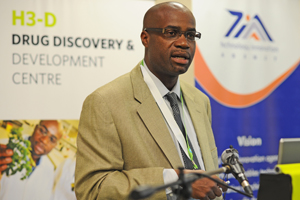 Novel chemical compounds that will form the basis of a new generation of lifesaving drugs took centre stage at the official launch of UCT's new Drug Discovery & Development Centre (H3-D) on 7 April.

But chemical bonding wasn't the only topic under discussion at the event, MC'd by Professor Allen Rodgers, head of the Department of Chemistry, and attended by several national and international guests. Bonding between institutions and researchers was flagged as a top priority as H3-D (shorthand for holistic drug discovery and development) is the product of a chain of partnerships. Many of these partners were represented at the launch: the Medicines for Malaria Venture (MMV), the national Technology Innovation Agency (TIA) and pharmaceutical companies among them.

Harnessing their combined efforts and support, the centre, with director Professor Kelly Chibale at the helm, will identify a wealth of new chemical entities for potential development into life-saving medicines. In keeping with its setting, the centre will target diseases common to South Africa and Africa - malaria, tuberculosis and cardiovascular disease, which headline the list, and a slew of other infectious diseases.

But as Chibale explained, putting just one drug on the shelf takes time and money - and the pursuit of many dead ends. He likened the process to kissing a multitude of frogs before finding one that turns into a prince - and a long value chain.

South Africa has been working from the polar ends of that value chain of drug discovery and development, says Chibale, who holds a national chair in drug discovery under the South African Research Chairs Initiative. The country is really good at the basic science on one end, and conducting the clinical research at the other.

However, it has not been adding value in the areas in-between, where the real opportunities exist, he argues.

"This centre is aimed at bridging the gap between the basic sciences and the clinical sciences."

That needs skills and experience that have been lacking on the continent. So H3-D has a second objective.

"We will be training a new generation of African scientists in the modern tools of conducting drug discovery."

It's an objective that resonated with organisations like TIA that, together with the MMV, will award R20 million to H3-D over the next four years. And TIA chairperson and former UCT vice-chancellor, Dr Mamphela Ramphele, was just one of the speakers who raised the topic of alliances.

"Drug discovery programmes, as has already been said, are expensive exercises; there is no way that a single institution can put together the [money] that is needed to go through this painful process, that journey of kissing frogs before one finally turns into a prince," she said.

Speaking of the benefits of institutional and industrial co-operation in his capacity as chairperson of the Scientific Advisory Board of H3-D, Dr Anthony Wood said: "What we're about is creative partnerships that allow us to combine our experiences, avoid unnecessary expenditure, and avoid kissing frogs when we recognise they're not going to turn into princes." (Wood is also senior vice-president and head of Worldwide Medicinal Chemistry for Pfizer.)

Comparing it to the passing of a baton in a relay race, Dr Timothy Wells, chief scientific officer at MMV, added: "The key is getting the interactions between government, between institutions, between the not-for-profit sector, between pharmaceutical companies, getting those handovers clean, that's how we're going to get the next generation of medicines."

H3-D fits in well with UCT's vision of itself as a model, a "brilliant example" of a developing-world university, said deputy vice-chancellor Professor Danie Visser at the launch.

"This is a university that looks both to the world and to its country and continent to identify its tasks and challenges."

View the video of Chibale speaking about the new Drug Discovery & Development Centre.