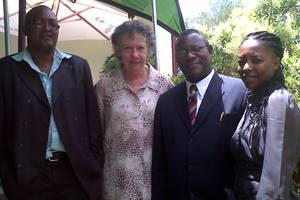 In June last year, the Institutional Planning Department (IPD) signed a Memorandum of Understanding (MoU) with the University of Namibia (UNAM), in so doing becoming the first support and administration department at UCT to enter into such as an agreement with another university.

While MoUs have a reputation for often leading nowhere, the IPD and UNAM have been taking theirs very seriously. Particularly around the topic of quality assurance (QA), which Namibia is beginning to embrace in its higher education sector, as are a number of other countries in the Southern African Development Community (SADC).

But South African universities are ahead of the curve, having gone through a QA process in recent years. So when representatives from the two institutions met at an international QA conference in Johannesburg in 2009, UNAM leapt at the opportunity to strike up relations with UCT. (Other SADC universities showed a similar interest.)

"South Africa is one of the African countries that have QA systems in place," says Lindi Tlou, quality-assurance manager at IPD.

UCT also has plenty of experience in the matter, following its audit by the Higher Education Quality Committee (HEQC) in 2005, and then drawing up its own Quality Improvement Plan, aka UNIQUIP, in 2006.

It's know-how from those exercises that IPD has been sharing with UNAM over the past months. So UNAM delegates visited UCT a few times, and, in the latest exchange, the IPD running a capacity-building workshop in Namibia - about to launch a national QA campaign - about how UCT prepared for an institutional audit, pulled its UNIQUIP report together, and conducts its departmental reviews.

The meeting was attended by senior university management and heads of departments, among many others.

"That workshop in Namibia was opened by their deputy minister of education, so they took it incredibly seriously," reports Judy Favish, IPD director.

The MoU, adds Favish, fits in well with UCT's Afropolitan ambitions and allows the university to broaden its knowledge of universities in other parts of Africa.