One giant speaks of another: Attenborough at UCT 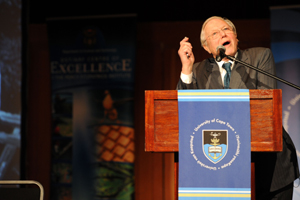 Birdman: Sir David Attenborough speaks on the work of Alfred Russel Wallace and the amazing birds of paradise.

Sir David Attenborough, renowned broadcaster, writer and naturalist, described his Vice-Chancellor's Open Lecture at UCT on 13 April as the fulfilment of a promise made long ago.

In 1945, he explained, he went to Clare College at the University of Cambridge for his undergraduate studies, and there met Patrick Niven, grandson of Sir Percy FitzPatrick, author of Jock of the Bushveld, and son of Cecily Niven, who would later bestow the Â£15 000 endowment that underpinned the establishment of UCT's Percy FitzPatrick Institute of African Ornithology. For years Patrick Niven beguiled him with stories of South Africa and its sights, inviting Attenborough to visit him here.

Despite his best intentions, Attenborough was never able to take up the invitation.

Until last night, when he spoke at UCT as a guest of the Fitztitute.

"Now sadly it's too late; Patrick died a few years ago," Attenborough said, "but I am keeping my promise to him as best I can."

The self-educated Wallace and the privileged Darwin, educated at Cambridge, couldn't have been more different, said Attenborough. But it was Wallace's travels and findings in South America and, particularly, the former East Indies or Malay Archipelago (now Indonesia and Malaysia), and his independent mooting of a theory of evolution based on natural selection, that would convince Darwin to outline his own theory in his revolutionary and provocative 1859 book, On the Origin of Species, probably "the most important book in the whole history of zoology", Attenborough explained.

The two men would, however, collaborate in the joint publication of two papers, which ran under the combined 1858 title, On the Tendency of Species to form Varieties; and on the Perpetuation of Varieties and Species by Natural Means of Selection.

Attenborough dedicated the bulk of his lecture to Wallace's groundbreaking work on the flightless birds of paradise - renowned for the strikingly colourful plumage of the males, used to full effect in mating rituals - in New Guinea and surrounding islands. Wallace became the first European to actually see the birds in all their glory, collecting a number of red birds of paradise from the island of Waigeo, today part of Indonesia.

"Wallace . . . had one overwhelming passion - for birds of paradise," said Attenborough. The birds, he added, had been an obsession of Europeans for hundreds of years, bewitched by their plumage and tales of their origins. (Birds who "float eternally in paradise", and so had no need for wings.)

Attenborough also showed footage from his own BBC documentary on the birds, Attenborough in Paradise, in which he finally fulfilled a childhood ambition to follow in Wallace's footsteps. (In addition, he regaled the audience with a story of his technologically challenged first attempt - sound hiccups, black and white footage - to film the birds in the 1940s.)

It was these birds and his later travels around the East Indies that inspired Wallace's contributions to the theory of evolution and the role of natural selection, which explains that those biological characteristics that are more useful for survival become, over generations, the most dominant ones, while not-so-handy traits become less common; and also prompted his theories on how different species are forged under different environmental pressures.

"It sounds simple, but its implications are very complex and profoundly important," said Attenborough.

Wallace wrote up this theory in a series of letters that he mailed to Darwin in England. The rest is well-recorded history.

Darwin has since become a byword - Darwinism - for evolutionary theory. But Wallace has not gone unsung, even though he often departed from Darwin on some of the details of evolutionary processes (and Darwin was usually proven right).

But Wallace was, in his later years, lavished with awards and national honours, including the British Order of Merit.

In addition, his book, The Malay Archipelago, in which he recounts his eight years in the region and published in 1869, remains an "amazing book", part adventure story, part scientific exploration, and peppered with profound insights, said Attenborough.

Attenborough ended his lecture with a quote from that book: "It seems sad that on the one hand such exquisite creatures should live out their lives and exhibit their charms only in these wild inhospitable regions. This consideration must surely tell us that all living things were not made for man, many of them have no relation to him, their happiness and enjoyments, their loves and hates, their struggles for existence, their vigorous life and early death, would seem to be immediately related to their own well-being and perpetuation alone."

The packed and enchanted Baxter Concert Hall, naturally, gave Attenborough a standing ovation. And vice-chancellor, Dr Max Price, noted that having Attenborough here at UCT could be likened to Wallace seeing those birds of paradise for the first time.

Listen to a podcast of the lecture.

Girl with the bird of paradise tattoo 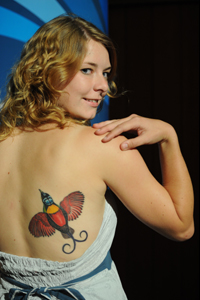 Sir David Attenborough had the audience eating out of his hand. No more so than when, in a Q&A following his lecture, young British student Hayley Evers-King, doing her PhD in oceanography at UCT, pointed Attenborough to a tattoo of her favourite bird of paradise on her back. Which is his favourite bird of paradise, she asked Attenborough? "It would be very ungallant of me," he replied, ever the gentleman, "to say anything other than, naturally, yours." Cue more laughter and rapturous applause.