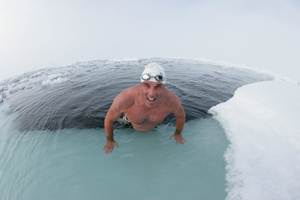 Oil and water: Renowned environmentalist and alumnus Lewis Pugh is opposing the use of fracking, a controversial drilling method that oil companies plan to use in the Karoo.

According to reports, environmentalist and "human polar bear" Lewis Pugh is taking on the oil companies, including Dutch oil giant Shell, over their plan to prospect for shale gas in the Karoo using a controversial drilling method called hydraulic fracturing, also called fracking.

Pugh, a UCT graduate, challenged Shell at a recent public hearing, held at Kelvin Grove in Cape Town, about its plans to prospect for oil in the Karoo, saying that its actions will contribute to global warming and climate change. He called on the public to make their voice heard by emailing their MPs and the chairman of the Petroleum Agency of South Africa.

Shell wants to prospect for gas in the shale rock that lies beneath the Karoo Basin using hydraulic fracturing. Fracking - which uses a mix of water and chemicals to create fractures in rocks - will deplete the scarce water resources of the Karoo and lead to contamination of the groundwater table, say those opposed to the project.

"The Karoo is to Shell what the Gulf of Mexico is to BP," Pugh has been quoted.

Although it ran what administrator Lisa Jackson has called a "literature study" on fracking in 2004, the United States Environmental Protection Agency (EPA) recently announced that it will launch a "full-scale study" of the drilling technique.