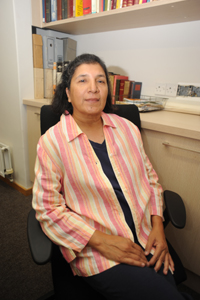 Associate Professor Rashida Manjoo of the Department of Public Law at UCT has a dream of her own - a world with no injustice, oppression and discrimination.

"I want to live in a world where social justice is the norm rather than the exception, and where I am valued as a human being, irrespective of my race, sex, professional status or any other markers of my multiple identities," she says.

Manjoo, the United Nations (UN) Special Rapporteur on Violence Against Women, has dedicated her working life to fighting for human rights in South Africa, Africa and the world.

This work will be recognised by the Northeastern University in the US when they confer on her an honorary degree at the university's School of Law graduation on 27 May. Manjoo has been a guest speaker at the school on few occasions, and is involved in providing feedback on a research project that involves her UN mandate.

As an African woman, such recognition gives Manjoo hope for the continent, she says.

"It signals that our work is having an impact, and that our expertise and experience is valued."

She believes that human rights violations are not only increasing but also becoming more visible.

"The prevalence and manifestations may differ, but the phenomenon is universal. Violence against women is the most pervasive violation of human rights globally."

The global challenge, Manjoo added, is to address impunity and the lack of accountability for such violations.