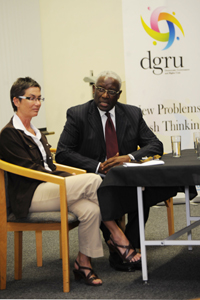 Constitutional matters: Prof PJ Schwikkard, Dean of Faculty of Law, and Chief Justice Sandile Ngcobo, at the launch of the Constitution Week.

The Constitution Week, currently underway in UCT's Faculty of Law, could not have asked for a better stamp of approval than that of Chief Justice Sandile Ngcobo.

Delivering the keynote address at the launch of the four-day series on 4 April, Ngcobo noted that events like Conweek ensure that the foundation of constitutional jurisprudence, which is at its formative stage in this country, is sound.

"Constitution Week provides a forum for a dialogue that brings expertise on constitutional law to reflect and engage on our developing constitutional jurisprudence," he said.

Constitution Week, the second such event at UCT, is the brainchild of the Democratic Governance and Rights Unit in the Department of Public Law, and draws attention to the Constitution while promoting constructive debate on the Constitution.

There is widespread misunderstanding about the nature of a relationship between the three government branches (the executive, legislature and the judiciary), said Ngcobo. This is evident in the criticism of the judiciary on judgements perceived to interfere with other branches and causing tension.

"All three branches have one mission in common - to uphold the Constitution."

Ngcobo added that the tension is natural and flows from the Constitution. He said the focus should be on how to understand and manage this tension in the context of democracy. One way of managing this is through constitutional dialogue, which should be based on trust and good faith.