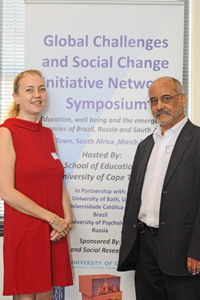 A three-day symposium, the ESRC Rising Power Symposium 2011, on the state of education and labour in developing countries during times of economic change, held at UCT from 7 to 9 March, was the third in a series of similar events, following on from meetings in Säo Paulo, Brazil, and Moscow, Russia.

This is an initiative of the Global Challenges and Social Change Initiative Network, a project led by Bath University in the UK, to examine the emergence of the ESRC's (the Economic and Social Research Council in the UK) so-called 'Rising Powers', including the BRIC nations (Brazil, Russia, India and China). South Africa was recently invited to become a member of BRIC.

"We are dedicated to understanding education," said Dr Joanne Hardman of UCT's School of Education, the South African representative of the initiative. "The questions we're posing are hard hitting, but these are questions we have to answer."

These questions include: what changes are envisaged in educational provision to ensure economic sustainability of rapid growth?; what will be the likely educational consequences and responses to social challenges, such as the urban-rural divide, social and economic inequality and access to education?; and how will the lives of children be transformed as these changes are invoked?

Delegates attending the symposium included project leader Professor Harry Daniels from the UK, Professor Angela Lessa from Brazil and Professor Anna Shvedovskaya from Russia. "South Africa is an enormously dramatic country," said deputy vice-chancellor Professor Crain Soudien in his opening address, "and we have sometimes shied away from discourse on the intensity of the question of development."

"I hope you come to an understanding how education can begin to realise its historic promise."