Lights out to save planet 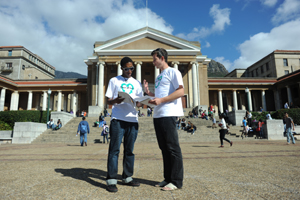 Green hour: The Green Campus Initiative's Keke Motjuwadi and Erik de Ridder in front of Jameson Hall, whose lights will be turned off during Earth Hour on Saturday, 27 March.

On Saturday, 26 March, at 20h30 local time worldwide, hundreds of millions of individuals and an untold number of businesses will turn off their lights and appliances for 60 minutes to mark Earth Hour 2011.

First held in Sydney, Australia, in 2007, Earth Hour, organised by the World Wide Fund for Nature (WWF), has since become a global phenomenon. Its aim is to raise awareness of sustainability issues and to encourage people to commit to action beyond the hour. 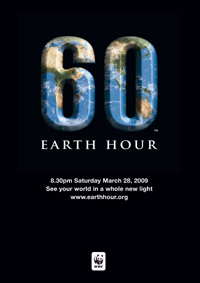 At UCT, the Green Campus Initiative (GCI), the student-run society that addresses issues of sustainability on campus, is again joining forces with the university's Properties & Services Department to commemorate Earth Hour. As part of its commitment, UCT will switch off as many lights around campus as security and safety concerns will allow.

"UCT gives its full support to this occasion and is again proud to join up with the Green Campus Initiative to mark Earth Hour," says Chris Briers of Properties & Services.

And to keep students alert to issues and occupied, the GCI will provide some recreation in the form of a live fire poi and music show - acoustic, of course, with musician Simon van Gend - at the Kopano Residence. The event kicks off at 20h00, and will run till around 21h30.

"We want to provide some entertainment for an hour of darkness," reports the GCI's Kate Pallett.

The society has also this past week asked students to sign a petition, again to raise awareness around Earth Hour.

"The Green Campus Initiative fully supports the Earth Hour movement, and is proud of the fact that the university has not only indicated its verbal support for the event, but has also followed through by pledging to turn off the power in selected areas around campus," said GCI chairperson, Erik de Ridder, in a statement. "As a leading university with a de facto leadership role in Cape Town and nationally, it is critical that we are not only doing the right thing, but that we are also seen to be doing the right thing. This is one such opportunity to make this connection."