Win by a whisker 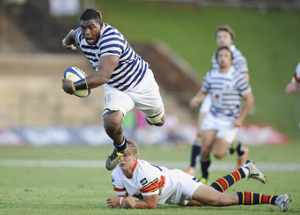 Leaps and bounds: UCT lifted their performance when they played Tuks in a must-win clash on Monday, epitomised here by Andries Coetzee, making his way past a Pretoria defender. (Picture by Lefty Shivambu/Gallo Images.)

It's been a nervy time for the UCT Ikey Tigers these past weeks. Two weeks ago they were sitting pretty atop the 2011 Varsity Cup log; by Monday, 21 March, they were fighting to stay in the competition.

Successive home defeats to Stellenbosch University and the University of Johannesburg (UJ) on 7 and 14 March, respectively, plunged the Tigers from first to fourth place on the log. For the first time in the Varsity Cup's four years the side was in real danger of losing out on one of the four semi-final berths.

"I don't think we played well in those two games," says UCT coach, Kevin Foote. "We slipped up there."

On Monday they had their fate in their own hands, but had to win against the University of Pretoria's Tuks - in Pretoria. To be fair, just about everybody else was in the same must-win boat.

The Tigers just about pulled it off, pipping Tuks with a high-drama 19-17 scoreline, thanks in no small part to 14 points off the boot of flyhalf Demetri Catrakilis, still, by some margin, the top scorer in this year's Varsity Cup. So far, Catrakilis has accounted for 103 of UCT's 213 points.

That win helped UCT finished second on the log, but on 23 league points a full four short of log-leaders UJ, and level with the University of Free State's Shimlas. But thanks to their superior points-scored difference, it was enough to earn UCT a home semi-final against Shimlas on 28 March. (Kick-off is scheduled for around 16h45.)

UJ, in turn, will face fourth-placed Tuks in Johannesburg later that evening.

Conspicuous by their absence from the semi-finals is Stellenbosch University, the only team - until this year - to have its name inscribed on the Varsity Cup trophy. The Maties' third defeat for the season on 21 March - 19-39 to UJ - and unfavourable results elsewhere put paid to their dream of a fourth title on the trot.

That may suggest that UCT is the bookies' favourites to take the title they've so narrowly missed out in two finals. Far from it.

UJ has the most consistent track record this year, losing only one match, 23-28 to Tuks a few weeks back. But on current form, the smart money must be on the Johannesburg team, bolstered by some smart recruitment from Cape Town and elsewhere.

And the Tigers will well recall their 22-34 defeat to UJ at UCT on 14 March, at a time they were still smarting from the pummelling by Maties the week before.

But for their part, UCT will go into their semi-final knowing they've got the better of Shimlas once before this year, winning 26-10 in the season-opening game. And they have the mental upper hand on Free State; they've never lost to them in a Varsity Cup clash, and they beat them in the 2010 semi-final.

And other factors are boding well for the Tigers, with key players possibly being released from the SA under-20 squad, and barely a niggle or ache among the rest.

But with the once-rampant Maties out of the picture, it's anybody's trophy now, says John le Roux, part of the executive team at the UCT Rugby Football Club.

"It opens things up completely; a bit like knocking Australia out of the Cricket World Cup," says Le Roux.

It may be a clichÃ©, but for now, both Foote and Le Roux agree, it's best to take things one game at a time.