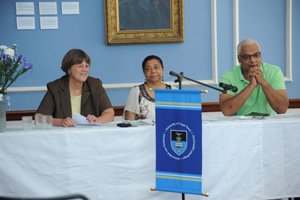 UCT has made huge strides to be accessible to people with disabilities, and many institutions around the country envy the university's improved conditions.

But there are some who are reluctant to document its actions and turn them into policy, those attending Then and Now, a UCT Month of Transformation event, heard.

Speakers at the event, which took place on 15 March, outlined how accessible UCT is to people with disabilities, and looked at progress the institution has made in this regard over the past 20 years.

Alumnus Shuaib Chalklen, the United Nations special rapporteur on disability, opened the conversation, and said he was "hugely impressed" by the "tremendous" physical changes that have occurred since he graduated in 1990.

When he was a student, rights of the disabled were not an issue, and he had to give up certain lectures simply because he struggled to get a way into a lecture theatre, he said.

An obstacle to the realisation of rights of the people with disabilities is what Chalklen described as a "deficit model", where institutions and individuals respond to the needs of those with disabilities with pity, rather than treating it as a right.