SA kids' health cause for concern 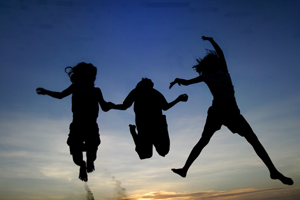 The C-minus that South Africa scored overall on the 2010 Healthy Active Kids 2010 Report Card may be a tad flattering.

The card - the country's second, following on the 2007 edition - is a report on the physical activity, nutrition and substance use among South African children and youth in primary and high school, drawing on over 95 published, peer-reviewed studies or reports - the National Youth Risk Behaviour Survey 2008 (published in 2010) and the Birth to Twenty project run from Wits University among them. A panel made up of partners from the private sector, academic institutions (including UCT), NGOs, the Health Sciences Research Council and the Medical Research Council then pores over these studies and compiles the report card - seen as an advocacy drive - with funding from Discovery Vitality.

The C-minus the country scored in 2010 matches the mark awarded by the panel in 2007. But the report card is blotched with Ds and Fs.

Then there's the paradoxical C-minus for obesity (an increase in overweight and obese children to 20% and 5% respectively) and D-minus for stunting, the reduced growth usually associated with malnutrition among children. Fast-food intake (an F grade) is also on the up, with 30% of children and youth eating fast food two to three times a week.

The country's children also earned an F for the amount of television they watch - 'screen time' lasting more than three hours a day. Not only does that increase sedentary time, but also the likelihood that children will view adverts related to food of poor nutritional value.

The smoking and alcohol numbers (both earning D grades) don't make for pretty reading, either. Nearly 30% of adolescents say they have smoked at some time or the other, while 21% admit to being smokers currently (double the global prevalence estimate).

The country's saving grace - forcing that overall grade in the right direction to a C- minus - is the wealth of policies and programmes designed to stem the tide. So a B for sport for development initiatives, a C for the growing number of vegetable gardens at schools, and an A for the country's exemplary tobacco legislation.

Also a light at the end of the tunnel are the scores of programmes and initiatives for which the panel assigned a rating of NE, or no evidence, meaning their impact is yet to be evaluated. These include the National School Nutrition Programme, tuck shop policies, schools-based interventions for physical activity and healthy eating, the work of the Bicycle Empowerment Network, as well as studies on interventions to curb smoking and alcohol intake.

The rewards from these could kick in soon, says Professor Vicki Lambert of the Medical Research Council/UCT Research Unit for Exercise Science and Sports Medicine, a member of the Healthy Active Kids review panel and the one who first proposed a South African version of the report - only the second in the world - after taking part in the Canadian exercise in 2006.

"The reason that we're still at a C-minus is that although the trends are concerning, we have many new initiatives and programmes; we know that our tobacco legislation is probably the best in the world; there are wonderful corporate social investments and private-public partnerships; and our schools-based initiatives are just in the process of being evaluated. So we think we're on the edge of a lot of evidence being generated about interventions and evaluations of government programmes, which I think will be promising."

But there's no two ways about it that right now, the downward trend is worrying. But how to turn things around?

An across-the-board, all-out effort, with everyone from government to civil society to the private sector to parents pitching in, suggests Dr Tracy Kolbe-Alexander, also of ESSM and the Healthy Active Kids panel.

"The message that we're trying to get across is that this requires a multi-level approach - it's multi-faceted," says Kolbe-Alexander. "Each grouping has to do something, and not just leave it to another grouping."

Another step in the right direction is a follow-up initiative that the panel is considering - a best-practice catalogue. "Some solutions," says Lambert.

The next report card is not yet scheduled, but it, too, has a role to play if the country is to make the grade - and improve its grade.

"In order to give our children a healthier future we have to change their destructive behaviours now," says Lambert, "but we have to understand which factors drive these behaviours."