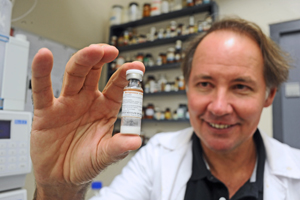 Vaccine vanquisher: Assoc Prof Neil Ravenscroft was part of an international collaboration that developed a vaccine to protect millions in Africa against meningitis. (Map visual courtesy of PATH)

It's easy to see why Associate Professor Neil Ravenscroft describes his work on MenAfriVac, a recently-released vaccine against meningitis, as the most important he's ever done.

After all, MenAfriVac has the potential to wipe out meningitis in the infamous 'meningitis belt' in the north of Africa, a strip of 25 countries that stretches from Senegal in the west to Ethiopia and Eritrea in the east. Some 450 million people live in this belt, said to account for the bulk of the world's meningitis epidemics, which hit the region every seven to 14 years. (It's the dry seasons from December to June, the dust winds, cold nights and upper respiratory tract infections, scientists believe, that make people in this region especially susceptible to infections.)

MenAfriVac is designed specifically to provide protection against group A Neisseria meningitidis, the bacterium responsible for nearly 90% of all meningococcal infections in the belt.

Meningitis may not boast the global scale or mortality rate of AIDS or malaria, but it's no trifle, says Ravenscroft, based in UCT's Department of Chemistry, where he runs a Bioanalytical and Vaccine Research Unit. The disease - which infects the meninges, the membranes surrounding the brain and spinal cord - kills thousands every year; the particularly violent epidemic of 1996-1997 caused 250 000 cases and led to 25 000 deaths in the meningitis belt.

But it leaves its mark in other ways as well. Of those who survive infections, thousands - 10-20% of those infected - are left deaf, retarded or disabled.

"These are massive epidemics, and they just sweep through society," says Ravenscroft. "And because there's little infrastructure, there's not much you can do about it."

A previous vaccine failed to contain the disease. This polysaccharide vaccine - so called because it's made from the long chains of sugar molecules, or polysaccharides, that form the outer capsule of the bacteria - was largely ineffective. It did not work well in children, required repeated vaccination, and defeated its own purpose as it could only be used once the epidemic was already in full flood.

In contrast, the new vaccine links the polysaccharide from group A Neisseria meningitidis to a protein carrier to form a highly immunogenic conjugate vaccine. This stimulates the body's immune system, allowing it to produce antibodies against the polysaccharide of the meningitis bacterium. 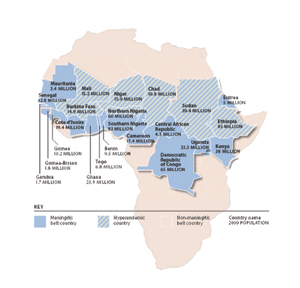 MenAfriVac also meets other essential criteria for curbing the spread of the disease in this largely underdeveloped region. It can be used with children as young as one, needs only one shot, and - here's its trump card - is cheap, finally coming in at between 40 and 50 American cents (or around R3.50) per dose.

Much less than the conjugate vaccines designed for the meningitis strains that occasionally break out in the developed world.

And affordable enough for most African countries, says the Meningitis Vaccine Project (MVP), the consortium led by the World Health Organisation (WHO) and PATH (a non-profit organisation in the US) that masterminded the development of the vaccine.

Big-name pharmaceutical countries would not commit to developing the vaccine within the targeted costs set by the MVP. So, instead, it turned to the Serum Institute of India, and farmed out most of the groundwork to scientists around the world.

For his part, Ravenscroft, who spent many years in vaccine research and development with Chiron Vaccines (now Novartis), conducted structural investigations and characterisation studies on the vaccine. He also prepared the first draft of the WHO Recommendations for the vaccines, and presented the final draft of the document to the WHO's Expert Committee on Biological Standardisation.

The Bill and Melinda Gates Foundation funded most of the work - to the tune of $70 million - and five years of clinical trials in India and West Africa.

In December last year, the WHO launched mass vaccination campaigns in Burkina Faso, Mali and Niger, setting out to vaccinate the country's 33 million residents aged between one and 29 years. The aim is to vaccinate 300 million people by 2015, ridding the region of the disease.

"Meningitis is only carried by humans," says Ravenscroft. "So if you vaccinate people, as many as possible, then the bacteria have nowhere to go, and there's a chance of eliminating the disease."

But that objective may well be frustrated by a lack of money. Even at the current cost, it's unlikely that African countries will have the funds to buy the millions of doses needed, says Ravenscroft. A further

US$475 million would be required, the WHO estimates, to cover vaccination programmes in all the meningitis-belt countries.

That said, the eradication of the disease is now within reach.