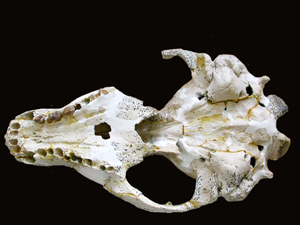 Fossil forensics: The skull of a Homiphoca capensis seal that lived at Langebaanweg five million years ago.

Today the Cape Fur seal is a common sight on South African coastlines. But five million years ago, seals populating the West Coast - then more closely related to some Antarctic seals - suffered disease and trauma, according to a new study.

In the fossil-rich area of Langebaanweg, about 110km from Cape Town, over 3 000 seal skeletal remains have been recovered, providing unique insight into their lives.

The study is the work of Dr Romala Govender and palaeo-biologist Professor Anusuya Chinsamy-Turan of UCT's Department of Zoology, with Graham Avery of Iziko South Africa Museum. Their research has revealed that seal bones recovered from Langebaanweg show evidence of osteoarthritis, which seems to have affected several members of this population.

A tibia also shows unusual growth that probably accommodated a partial dislocation of the knee. A healed fracture of an ulna is evidence that although the limb was shortened, the seal lived for several more years.

There is also evidence of osteomyelitis (infection of the bone and bone marrow) in the pelvic bones of a young seal, which may have resulted from an open wound allowing infection to spread to the bone. Such an injury could have occurred during the mating season - when males are known to be aggressive - or as the result of a predator attack.

"The work we do could easily be called palaeo-forensics," explains Chinsamy-Turan. "We literally piece together every bit of evidence from the fossilised hard parts to tell us about the lives of extinct animals."

"It has been wonderful to be able to unravel the biology of these five-million-year-old seals," says Govender. "This research has provided exceptional insight into the lives of seals that once lived on our West Coast."