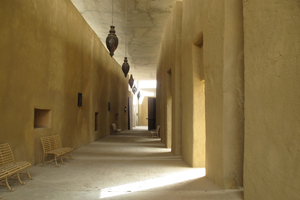 The Institute of Higher Studies and Islamic Research in Timbuktu, built by the South African government under former president Thabo Mbeki.

In January, during Mali's driest season, seven UCT staff members, three colleagues from the University of the Western Cape, and two representatives of the Ford Foundation, arrived in the fabled city of Timbuktu. The week-long visit was organised by the Tombouctou Manuscripts (Mss) Project, led by Associate Professor Shamil Jeppie, senior researcher at the Institute for the Humanities in Africa (HUMA). Since 2002, the project has been working with various aspects of the manuscript tradition of Mali, including research, translation and digitisation of the historical documents. Dr Marilet Sienaert of the research office penned this report.

This particular trip was part of the project's broader focus on the history of writing and book culture on the African continent. The visit was both an introduction to the wonders of Mali for our South African colleagues, and an intellectual exchange between our local scholars and their West African counterparts.

The main drawcard was an academic seminar, co-hosted by the Tombouctou Mss Project and SAVAMA-DCI, a Malian non-governmental organisation working on manuscript preservation. The two-day seminar, Writing in African History, Writing African History, covered a host of issues, from the politics of archives to the use of oral sources and the instability of written sources. The Malian scholars provided insight into working with the Timbuktu manuscripts, both as sources for history and historical texts themselves, while South African scholars offered insight into practical and conceptual issues regarding the writing of history in South Africa.

The group also spent a day on the Niger River, travelling by pirogue to Djenne. Seen as a sister city of Timbuktu, Djenne has its own - although less well-known - manuscript tradition, which locals are beginning to unearth and conserve. As a part of emerging restoration efforts, the Tombouctou Project organised a workshop on conservation with custodians of the Djenne Manuscript Library. This included a discussion on the principles and importance of conservation, led Shamil Jeppie, Professor Pippa Skotnes (Michaelis School of Fine Art)and Professor Carolyn Hamilton (Archive and Public Culture), and a practical session on manuscript conservation, facilitated by Fousseyni Kouyate of SAVAMA-DCI.

In the context of UCT's Afropolitan aspirations, the trip was particularly significant in terms of relationship-building. It's clear that meaningful collaboration requires time, patience, mutual trust and constant adjustment to a range of worldviews. The Tombouctou Mss Project is exemplary in this regard, as Shamil has been working closely with the manuscript custodians for more than 10 years. The respect and appreciation for each other's efforts to meet on common ground were tangible throughout the sometimes complex discussions, facilitated by interpreters between Arabic, French, English and local language speakers.

In addition to the scheduled seminars, we spent some time exploring the towns and visiting historical sites around Timbuktu, Djenne and Bamako, Mali's capital. In Timbuktu and Djenne we were taken on guided tours to see some of the thousands of historical manuscripts held in private libraries and family collections. We were also able to visit the historic Grand Mosque of Djenne, the largest mud structure in the world, the Sankore Mosque of Timbuktu, site of the world's oldest centre of higher learning, and the archaeological site Djenne-Djeno, dating to the 3rd century BC.

What struck me very strongly was the fact that in order to position ourselves in relation to Africa and to ensure that we really contribute to development on this continent, there can be absolutely no quick fixes. Providing endless bursaries and churning out PhDs will only scratch at the surface. The real challenge is for us to invest time in building relationships and be willing to accommodate a range of worldviews and value systems when collaborating on a project. This means that the goals of a research project must be negotiated through the obstacles presented by these different ways of 'being in the world'.

To give you an example: The custodians of the manuscripts are no longer keen to have them placed in a central archive where they can be conserved in state-of-the-art facilities as provided by the South Africa government. For them the manuscripts are artifacts, precious family relics that have been passed on from generation to generation, tied up in string and kept in trunks and wooden boxes.

The notion of conservation and digitisation in an archive, for others to have access to the work, is foreign to them. Shamil has painstakingly been building up their trust in him over the past 10 years (with on average four visits per year!), and we are now starting to see the benefits.

Some manuscript owners in Djenne (the other fabulously interesting UNESCO world heritage town we visited) have recently agreed to store their manuscripts in the local imam's library (which is properly constructed and maintained), where each family is assigned a cupboard with their name on it, for which they retain the key.

Only recently have some families have started to say that the imam may keep their keys. In other words, they are slowly developing an appreciation for a scholarly archive in the Western sense. And we have been sensitised to their way of investing the manuscripts with values that extend beyond their scholarly importance.

Shamil has been exemplary in his patience and respect for the situation, all in the context of different worldviews, different approaches to history and different ways of investing in the understanding and the value of the manuscripts. As a matter of interest, although the content is mostly to do with Islam (codes of conduct, etc) there are a great many judiciary accounts (rich socio-economic material; for example, on the role of women, and how slaves were treated) as well as astronomy and astrology texts. There is a claim that a large percentage of the Djenne manuscripts are esoteric in nature, but this still has to be fully investigated and constitutes rich ground for further research.

On our travels I was struck by the enormous expanse of empty, arid space (most of Mali is desert, after all) that one sees from the air, and the notion of carving out an existence in a land that seems so desolate and empty of vegetation and wildlife.

The poverty of the people is indeed extreme, but in places like Timbuktu and Djenne this translates into a kind of simplicity and aesthetic that takes one by surprise. The extraordinary mud architecture is one example, but the people themselves (tall, of slender build and graceful) move slowly in the heat and protect themselves from the all-invasive desert dust by wrapping themselves in robes and turbans in a range of stunning and varied colours.

The Tuareg's trademark blue clothing make these traders stand out from afar and their persuasive salesmanship and incessant bargaining became quite exhausting at times (a three-step, fast-paced trading process is required, which really stretched our French and mental arithmetic in calculating the exchange rate for CFAs at high speed!).

In bustling Bamako the women are strikingly elegant, wearing narrow calf-length or long slitted skirts in local cotton fabrics with fitted, matching tops. Although the dirt streets are narrow and dusty, they are social sites with people sitting under makeshift canopies along the sides, talking, cooking and eating, praying, heckling...

In the dusty north we all bought turbans like the locals' to protect ourselves from the dust and wind.

To get from Mopti to Djenne we travelled for 10 hours in a wooden pirogue on the Niger, sitting on narrow wooden benches under a canopy of woven palm matting. Our crew consisted of one man sitting at the back stopping and starting the small diesel engine on the command of the navigator standing at the front of the pirogue with a long pole. His job was to steer us through the sand banks (the river was low) and he would shout to the engine master whenever more or less power was required. The cook on board was a woman, who prepared delicious fresh fish and peppery vegetables with rice over a small open fire. We were struck by the many small villages along the way, each with its own small but beautifully maintained mud mosques and herd of cattle. All along we saw men casting their fishing nets from small pinasses, or wooden, motorised canoes.

In Timbuktu we stayed in a large local house that had been renovated by a French woman now married to a Tuareg. It is now managed as lodgings for visitors and the kitchen is run by the owner's mother, who relocated from France to help her daughter set up the business. A cheerful woman in her sixties, she has opted to stay on (that was 12 years ago!), resigning from her job as a successful chemist in France. As a consequence we had French cuisine made with mostly local ingredients (think onion tart and chicken with ginger). The bread was brought in from the streets where it is baked in clay ovens, delicious but a bit gritty, with the odd bit of (camel?) fluff. An enduring memory is sitting down to dinner on the roof of our dwelling, with a full moon over Timbuktu and a head full of mind-blowing impressions garnered during the day.