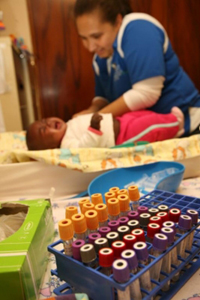 Saving lives: SATVI representatives recently went before Parliament to outline the need for new and better vaccines against tuberculosis.

Among the speakers was Dr Hassan Mahomed, SATVI co-director, who explained the dire need for a new vaccine to curb the spread of the disease, especially in the face of TB's growing drug-resistance. In turn, Sebastian Gelderbloem, the head of the Aeras Africa, outline the progress made in TB vaccine development globally.

And SATVI co-director, Professor Willem Hanekom of UCT's Institute for Infectious Disease and Molecular Medicine, pointed out that most funding for TB vaccine research (almost all of SATVI's 2010 budget of R50 million, for example) originates from overseas rather than South African coffers, despite South Africa having the second highest TB rate in the world. Overall the meeting went well, reports Hanekom, and SATVI is planning to shortly follow up with and approach key funders in government.