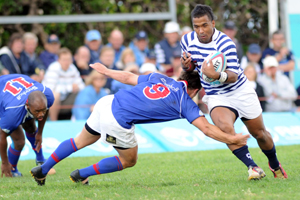 New year: After the disappointment of 2010, UCT, under new coach Kevin Foote, will hope to get his hands on the Varsity Cup trophy.

As two-time losing finalists, the Ikey Tigers may have earned the title as perennial runners-up in the Varsity Cup, but it's not one new coach, Kevin Foote (pictured below), particularly wants to live up to.

"You can't go into a competition like this thinking that you're the second-best side," he says from Bloemfontein, where UCT plays the University of Free State's Shimlas this evening at 17h00 in the opening match of the 2011 Varsity Cup, the competition's fourth run. "The guys are under no illusion that they're good enough to win this whole thing."

Foote, a former SA Sevens captain under Chester Williams, appreciates that he has big boots to fill, replacing as he does John Dobson, who is now head coach of the Western Province Vodacom Cup side. But he plans to stick to the team's winning formula - UCT's brand of running rugby.

It's a style that the many UCT newbies - eight since the two sides faced off in the 2010 semi-final - will quickly have to adapt to. Fortunately, UCT's not the only team to have to induct umpteen newcomers. 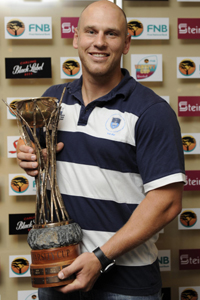 Three-time champions Stellenbosch University - yes, the only team to have its name inscribed on the trophy - has lost the core of its victorious 2010 squad. And, from reporting on varsitycup.co.za, most other teams are in similar boats. And players appear to have changed sides wholesale since 2010.

What's of no doubt is that everyone's taking Varsity Cup a lot more seriously than they did in its inaugural year in 2008. With television broadcasts, a princely winner's cheque and institutional bragging rights to play for, universities have called on the big guns to bolster their campaigns.

Tshwane University of Technology and the Nelson Mandela Metropolitan University have sought out the services of former Springbok coach Jake White, while the University of Pretoria has been put through the mill by Blue Bulls boss Heyneke Meyer.

And tonight UCT can expect a bushy-tailed Shimlas team, which has been working out with Derick Coetzee, the former Springbok conditioning coach. While steering clear of predictions, Foote is keen for the Tigers to stick to the game plan.

"I just hope to go out there and play a great game of rugby, and the result will take care of itself."