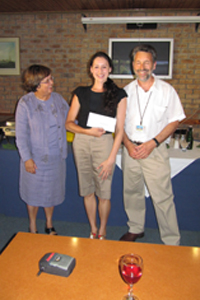 Keeping the legacy: Winner of the 2010 David Bourne Prize Gabriella Glattstein-Young, here flanked by dean of the Faculty of Health Sciences, Prof Marian Jacobs, and Prof Rodney Ehrlich, convenor of the MPH programme.

Canadian student Gabriella Glattstein-Young could not get a better send-off from UCT than the inaugural David Bourne Prize.

Glattstein-Young returned home recently after completing a two-and-half year programme at UCT during which time she worked extensively with local civil society organisations on a health and human rights project.

She scooped the R5 000 prize for scoring the highest marks for the 2010 master's in public health programme - over 10 courses and the dissertation required for the qualification. The award was made at the orientation for new Master in Public Health students recently.

The David Bourne Prize was established by the School of Public Health and Family Medicine in memory of lecturer David Bourne. An extraordinary scientist, demographer-turned-epidemiologist, health advocate and general enthusiast for life, Bourne was a lecturer at the school for 31 years before his untimely death in 2009.

Professor Leslie London, director of the school, said of the prize: "We hope that the award will serve as an inspiration to incoming MPH students to live up to the legacy left by David Bourne - to use scientific evidence as the basis for advocating for health policy and programme changes, something David did throughout his career.

"He was not scared to speak truth to power and we hope that our students, award winners and others will come to recognise his legacy as an essential part of public health practice."