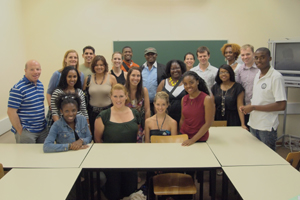 New partners: SRC president Amanda Ngwenya (second from right; middle) and some of her committee members met with students from George Washington University.

The Students' Representative Council (SRC) recently hosted students from George Washington University in the US, part of its objective to establish partnerships with international tertiary institutions.

The 16 American students are completing their master's programme in university administration, and came to UCT on 6 January on a fact-finding mission, looking at the structure and operations of the university's administration.

The evening visit involved a round-table discussion where the 'identity' of a UCT student and the issues facing African students were discussed. Later the group broke into smaller clusters to brainstorm solutions to the problems facing contemporary African universities. The visitors also met with deputy vice-chancellor Professor Thandabantu Nhlapho.

Sean Darge, the SRC's secretary general, noted that the international students were particularly interested in the development of UCT's institutional climate and the type of student life a UCT student enjoys.

Darge added: "The experience was quite fruitful, and the SRC was able to establish a positive relationship with a group of students who will ultimately shape the landscape of tertiary education abroad."