Sher and Suzman wow peers and patrons at Baxter 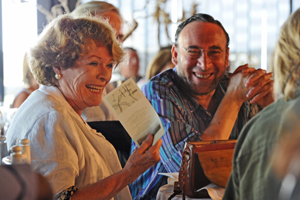 Honoured guests: Theatre legends Janet Suzman and Sir Antony Sher, who received honorary doctorates from UCT this week, photographed at a lunch held in their honour at the Baxter Theatre Centre.

Sir Antony Sher and Janet Suzman may be based in the UK, but they continue to grace the stages of the Baxter Theatre Centre, Sher most recently playing Prospero in The Tempest in 2009, while Suzman last worked at the Baxter in 2007, when she directed Hamlet.

On 21 December they returned to their sometime stomping grounds, but this time as drawcards for a luncheon and auction staged, firstly, to celebrate the honorary doctorates they received from UCT the day before, and secondly to raise funds for the Baxter coffers. Peers and patrons were generous with their support of the event, tickets going for R1 000 a seat.

And the theatre fared well at auction too. Auctioneer and stand-up comic Nic Rabinowitz entertained, cajoled and goaded as he sought to tease out the best bids for the items. Pieces included specially-branded bottles of Diemersfontein wines, autographed pictures of the two actors, and table centre-pieces tailor-made for the occasion by the Baxter's head of wardrobe and props, the award-winning Koos Marais.

The lot that fetched the best price on the day - R10 000 - was a self-portrait by Sher, which he'd sketched in preparation for The Tempest.