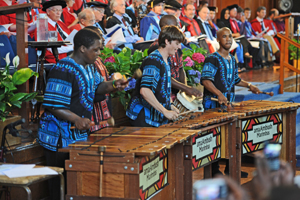 The morning event brought together graduands from the Faculties of Health Sciences, Law and Science. Over this ceremony, UCT also presented honorary doctorates in law (LLD) to Judge Navi Pillay, the United Nations High Commissioner for Human Rights, and Baroness Lynda Chalker, a British politician and founder of the Chalker Foundation for Africa (Monday Paper article).

In addition, the UCT Social Responsiveness Award for 2010 was made to Dr Hanna-Andrea Rother of the School of Public Health and Family Medicine (Monday Paper article), while Annie Templeton, A founder of the Catholic Welfare Bureau, received the university's President of Convocation Medal.

The last words in the university's six-day, 12-ceremony graduation programme fell to the Faculty of Humanities, which capped its social science graduates at the afternoon ceremony.