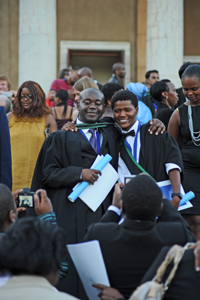 UCT's December 2010 graduations continued on their merry way on Friday and Saturday, 17 and 18 December, as over 1 600 more students were capped.

The Faculties of Engineering & the Built Environment (EBE) and Commerce were up on Friday (nearly 700 students filed through), while Commerce, Humanities and EBE students took to the platform on Saturday, with just under 1 000 students bringing their studies to an official close.

Two more ceremonies are lined up for today - Monday, 20 December - the morning event hosted by the Faculty of Commerce, while the Faculty of Humanities does the honours at the 15h00 ceremony. At that afternoon graduation, UCT will also confer honorary degrees on acclaimed thespians Sir Antony Sher and Janet Suzman.

Two more ceremonies - the final ones of the six-day programme - will take place on Tuesday, 21 December.