Looking out for the genes 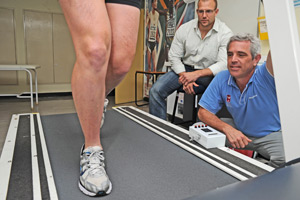 In the running: Dr Mike Posthumus (left) and Assoc Prof Malcolm Collins took a long, hard look at the genetic factors that predispose runners to a condition known as tendinopathy.

UCT's Associate Professor Malcolm Collins and Dr Mike Posthumus won the prize for the best poster presentation at the International Scientific Tendinopathy Symposium, held in Umeå, Sweden, at the end of October.

The award is nothing to be sneezed at. The event focuses exclusively on tendinopathy, a painful condition usually related to overuse of tendons, and attracts the cream of the world's researchers in the field.

The poster award also cements the reputation of the Medical Research Council/UCT Research Unit for Exercise Science and Sports Medicine (ESSM), where Collins and Posthumus are based, as world leaders in the study of the genetic factors related to the condition. It's a topic that the pair covered in all seven of their oral and poster presentations at the symposium.

Such as in their poster, A potential link between Achilles tendinopathy risk and endurance running ability. In that study, Posthumus, Collins and Professor Martin Schwellnus identified a genetic variant - previously shown to predispose some people to Achilles tendinopathy - that is also associated with performance.

Interestingly, the study reported that the gene (known as COL5A1) influences performance in endurance running events. This is what Posthumus found in his study of 313 triathletes who took part in either the 2006 or 2007 South African Ironman Triathlons.

COL5A1 encodes (or issues instructions) for the production of a protein known as type-V collagen. In turn, the collagens, made up of fine threads of fibrils or fibres, provide support to the body's tissues, such as the tendons.

But who gets tight, painful heels, and who gets nicely oiled ones? That's partially determined by the individual's specific COL5A1 genotype, ie the kinds of type-V collagen that the gene encodes for.

And alas, it's a double-edged sword.

In his Ironman study, Posthumus hypothesised that those runners with the T variant of COL5A1, which is associated with "increased musculoskeletal stiffness", would be more predisposed to tendinopathy (and up to twice as likely to develop the condition). Funnily enough, triathletes with this form of the gene did better in the race's running segment, as a result of improved muscular efficiency.

On the other hand, it is thought that individuals with the C variant of the COL5A1 gene had the more flexible Achilles tendons (and built-in protection against tendinopathy). But these triathletes didn't do as well on the runs.

These findings may smack of genetic predeterminism, but they're far from the full story, say the researchers. Having the T variant of the COL5A1 gene doesn't mean that a runner will develop tendinopathy without question; merely that he or she will be more at risk of doing so. (And nor does having the C variant - and more flexible Achilles tendons - mean a runner will never win a footrace.)

"It's not a cause and effect," says Posthumus.

Rather, the long-term goal is to find a test, based on the COL5A1 genotype and other genetic markers (the non-modifiable factor), that would reveal who would be more likely to develop tendinopathy and other musculoskeletal soft tissue injuries, and who would be less likely.

The trick would then be to develop interventions for the modifiable factors, such as training and treatment.

Other than the poster award, the study also drew interest from other delegates at the Umeå symposium.

"It's always been suspected; and people wrote about the possibility that there is a genetic component to the condition," says Collins. "But we've been the first - internationally - to actually identify the genetic elements that alter your risk for tendinopathy."

As trendsetters, they can now expect more researchers to follow hard on their heels.