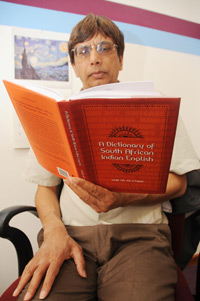 Word's worth: Prof Rajend Mesthrie is the author of A Dictionary of South African Indian English.

Professor Rajend Mesthrie of UCT's Department of English Languages and Literatures recently launched A Dictionary of South African Indian English, published by UCT Press this year, which marks the 150th anniversary of the first ship bringing Indian labourers to then-Natal. Monday Paper spoke to Mesthrie about the 1 700-word project.

What prompted you to write the book?

The conviction that our current dictionaries of English in South Africa, excellent though they are, merely skim the surface of the riches that lie behind dialect, regional and ethnic usage in the country. As English spreads globally it's bound to diversify. Sociolinguists like me see language as played out in living, changing communities, rather than something fixed and stored in dusty Oxford dictionaries and crusty Cambridge grammars. It is up to properly trained linguists to support and give credence to ordinary language used by ordinary people.

Could you give us a few examples?

There are religious terms like 'Diwāli', 'Eid',and 'Kāvady'; culinary terms like 'biryāni' (so spelled), 'bunny chow', 'rōti' (not 'rooti') and 'dhanya'. There are also neologisms (or new coinages) like 'healthy' meaning 'fat', and 'future' meaning 'one's future husband or wife' (possibly an archaism from Victorian times). And of course, lots of slang: 'lake', adapted from the Afrikaans lekker, 'pōzi' for 'house' adapted from the Great War usage, meaning 'going back into position'.

Can these words be used in Scrabble?

Some words are official, like Gandhi's coinage in Durban in 1903 of 'Satyagraha', which means 'resistance to injustice by peaceful and ethical means'. This is now in all international dictionaries, but the word started off in Gandhi's newspaper based in Durban. A truly important and historic word. I also included historical words like 'girmit', the term labourers coined for the practice of indenture. But there's no law against dialect Scrabble as far as I know.