At what vice-chancellor Dr Max Price described as both a "sad and a sweet occasion", UCT said farewell to 56 staff members who retire at the end of 2010.

Together they have contributed a combined total of over 1 500 years, with one lecturer having spent 45 years at UCT.

"I prefer at this time to pay homage to the effort each of you has put into making UCT the leading university on the African continent," Price said at the annual Retiree's Dinner on 11 November. "Your individual achievements have helped build up the community at UCT - and it is that sense of community that makes students and staff feel they belong here."

Price added that one of the building blocks for a community such as UCT is the institutional knowledge and memory each individual contributes.

"Thank you for that priceless gift. I trust that you will leave with a sense that you also received from us, in the form of friendship, experience and the wisdom you have built up over the years."

Price reminded the retirees that they remain part of the university, and that they are expected to join Summer School courses, attend vice-chancellor's lectures, cheer for sports teams, and attend performances at the Baxter Theatre.

On behalf of the retirees, Jean Graham of Information and Communication Technology Services thanked UCT for their opportunities and wished the university continued success.

Graham said although they looked forward to free time to explore other interests, they would miss their colleagues, the friendships, and the experience UCT had afforded them. 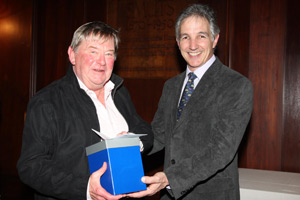 Professor Dave Dewar has been with UCT for 39 years - 37 as a full-time member of staff. Over this time he has become one of the university's most respected scholars; he was elected a UCT Fellow in 1997, and currently holds the BP Chair in City and Regional Planning. He is author or co-author of nine books and over 200 monographs and articles on city and regional planning. He also consults widely in Southern Africa and has been core consultant to the City of Cape Town in drawing up a spatial development framework for the city. Dewar retires from UCT at the end of 2010. Monday Paper met with him in his office - there's some clearing out happening - and spoke to him about life on campus, how his discipline and the university have changed (or not), multidisciplinarity versus interdisciplinarity, what'll he miss about not coming into the office (as much), and how he plans to spend 'retirement'.

Monday Paper: Thirty-seven, 39 years at any company is quite a long time. What is it about UCT that kept you here?

Dewar: Academic life always appealed to me; the search for understanding. I always thought UCT had - and has - a major role to play in the development of the country, particularly in a discipline like mine. When I started here planning was effectively a handmaiden of apartheid, so in a way we were beginning to challenge that and rewriting the theory. So there was no other place you'd rather be.

MP: How has your discipline - planning - changed over the years?

Dewar: I don't think we're doing very well in meeting the challenges of South African cities at the present time. We still have a long way to go. What's required is a radical shift in the way we think about cities. There are capacity problems. But probably the biggest single problem that the professions face at the moment is that they still work in silos.

MP: Is there then not enough - what's the buzzword? - multidisciplinary work happening?

MP: What have been the big changes at UCT over the past decades, other than the demographic changes, of course?

Dewar: I think it's changed fundamentally, and most of that has mainly to do with a kind of size thing. Almost by definition it leads to a very different kind of management style - there is a much greater degree of managerialism compared to when I started. And I think that does impact negatively on collegiality.

Dewar: It's certainly not retirement in the sense that things come to an end. In a way it's a kind of new beginning. I'll be building my consultancy practice, and I will continue writing. I have two books I'm finishing now, and there are a couple more in the pipeline. So it will just give me time to write.

MP: What won't you miss about UCT, and what will you miss?

Dewar: I won't miss administration, and I won't miss marking. And the routine of it. What I will miss are the friendships - we've been lucky that over 35 years the core of our programmes has involved exactly the same people, so we're a very close group and there's a high degree of collegiality. In a way, we were all starting out together, and had to reinvent the profession. And that's been a very challenging and exciting and ongoing journey of discovery. 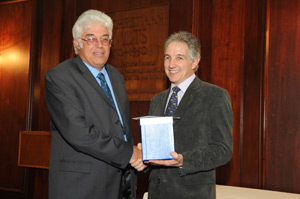 It's understandable that Alan Rynhoud of the Department of Mathematics and Applied Mathematics intends spending a couple more years at UCT after he retires at the end of the year. The 65-year-old has spent 48 years at UCT, 44 of those in the same office.

"This is really my office. When I leave I will fold it and take it with me," he jokes. (Rynhoud is the only one who has ever used Room 416 since the former physics block was rebuilt and absorbed by the mathematics block).

Rynhoud's stint at UCT began as a first-year student in 1962; he was appointed as a junior lecturer in 1966 and then a full-time lecturer four years later.

During his tenure, he has witnessed UCT growing from a "village", with few buildings, staff and students, to a "city".

"We had smallish lecture groups of around 80 to 90 students. These days you have up to 300 people in a class, which is not ideal," says the dedicated teacher. The number of staff did not match the increase in students, and the intake is not adequately prepared for the university environment, something which disappoints Rynhoud.

But the satisfaction of interacting with some of the best students in the country, and seeing them succeed in their careers, has made the long stint at UCT worthwhile.

And there have been funny moments, too. One student, wearing shorts, had written maths formulae on his thighs, which were revealed when he stretched before his exam. Afterwards, it was found that three of the four formulae were wrong!