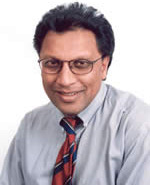 The health sciences community at UCT has been shocked by the sudden death of Professor Cassim (Cas) Motala on 10 November 2010 in Singapore.

"Prof Motala made a huge contribution to the field of medicine and the Faculty of Health Sciences over his many years here. He will be remembered with great fondness, especially by his colleagues and former students. The university extends its condolences to Prof Motala's family."

Motala was born on 6 July 1947, in Ventersdrop, Gauteng. He graduated with a MBChB from the University of Natal in 1970 and did his internship at King Edward VIII Hospital in Durban. He worked as a general practitioner in Vryburg, North West before joining the Red Cross War Memorial Children's Hospital as a senior house officer in 1979.

He often said that he had learned more by being a GP in an impoverished community than in any other setting. This had given him compassion and desire to "look after" people.

In 1983, he qualified as a specialist paediatrician, and in 2001, obtained a fellowship at the American College of Allergy, Asthma and Immunology. In 1998 the same organisation named him the first South African recipient of an International Distinguished Fellowship in Allergy and Clinical Immunology.

In 2004 he was appointed co-director of the Allergy Division in the School of Child and Adolescent Health. Prior to this, he contributed towards developing and implementing the Diploma in Allergology examination under the auspices of the College of Medicine of South Africa, and contributed to the submission to the Health Professions Council to have allergology recognised as a sub-speciality.

In addition to his leadership positions at UCT and the Faculty of Health Sciences, Motala served on the boards of several organisations, chairing the South African Childhood Asthma Working Group and twice serving as President of the Allergy Society of South Africa. From 2000 to 2007, he was the first South African to serve on the board of the World Allergy Organisation.

Colleague Dr Tony Westwood said: "Cas has been a central pillar of the School of Child and Adolescent Health at UCT as well as the Department of Paediatrics at Red Cross War Memorial Children's Hospital; and of course a major leader in paediatric allergy in the country and internationally. He will be sorely, sorely missed."

Motala is survived by his wife, Farieda, a paediatrician at Red Cross War Memorial Children's Hospital; and son, Mikhail, a UCT student.