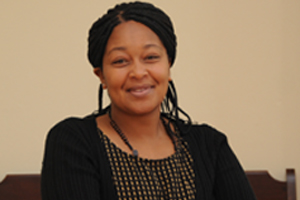 New ground: Lecture notes prepared by Matumo Ramafikeng and colleagues in UCT's Division of Occupational Therapy have appeared in a journal aimed at Spanish-speaking countries.

In the world of the worldwide web, lecture notes can go far these days. But even Matumo Ramafikeng was surprised that notes she had prepared for a stand-in lecturing stint in UCT's Division of Occupational Therapy went all to way to the Spanish-speaking world.

The editors of the Journal of Occupational Therapy of Galicia (TOG) - named, in part, after the historic region in Spain - translated into Spanish Ramafikeng's lecture notes on the Model of Creative Ability, made available online through UCT's OpenContent directory. Those notes have now appeared as an introduction to the journal's September edition, an occupational-therapy practice model that originated in South Africa in the 1960s and 1970s.

In 2009 Ramafikeng, then working on her master's degree, was standing in for lecturer Dr Roshan Galvaan, who in turn was wrapping up her PhD. But when teaching the model - as one of six - on the conceptual frameworks module to the third-year occupational therapy students, Ramafikeng realised that they were having a hard time getting to grips with the models' more abstract elements.

Which is when the division's Associate Professor Lana van Niekerk suggested she put her lessons plans on UCT's OpenContent directory.

"We wanted to see how we could use technology to enhance student learning and interaction, and particularly their understanding of conceptual frameworks."

But rather than merely copying and pasting the lecture notes online, Ramafikeng went the extra mile. Working with Galvaan and Van Niekerk, she souped up the notes by refining 'paper cases' (case studies) and adding videos, sourced newspaper clips, updated the literature review, and also 'translated' the perplexing textbook material into easier-to-understand English.

The elbow grease paid off.

"The students found it more appealing, and the use of video made it easier for them to connect to the case studies," she reports.

The article is also breaking other new ground; according to the journal's editors, it's is the first on the Model of Creative Ability to be published in Spanish-speaking countries.