Fisheries' situation not so pessimistic - scientists 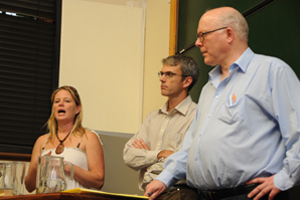 Fishing it out: Dr Samantha Petersen (left) responds to a question from the floor, with Assoc Prof Colin Attwood (middle) and Prof Doug Butterworth, during a discussion on the movie The End of the Line.

The End of the Line, the headline-making 2008 documentary film that claimed that the world's fisheries will collapse by 2048 under the current burden of fishing, is outdated and not fair commentary on recent scientific findings.

But the movie, currently on show in cinemas, has certainly succeeded in creating awareness of over-fishing, it was agreed at a recent panel discussion titled, The End of the Line - How sound is the science advanced?, at UCT.

Professor Doug Butterworth of the Department of Mathematics and Applied Mathematics, and director of its Marine Resource Assessment and Management Group, noted that the picture painted by the movie, that 90% of the world's large predatory fish has vanished, was based on catch and not on abundance data, and does not square with the recent research.

Furthermore, trends in fish abundance in many of the world's ecosystems have stabilized, with some even showing recent upturns. This is quite contrary to claims of collapse by 2048.

"Both the 90% and 2048 analyses no longer have any credence in the fisheries science community." Butterworth explained.

Butterworth, however, agreed with the documentary that people should consume sustainable seafood. He called on politicians to respect sound science and cut catches and fishing effort where necessary.

Associate Professor Colin Attwood of the Department of Zoology said that while the book, on which the film is based, is well researched and balanced, the movie, in striving to make its point more powerfully, does so by being selective in its coverage of fisheries, and using some examples that have been discredited.

Attwood argued that, contrary to what might be understood from the film, it is not always the high-technology industries and big companies that over-fish stocks. The primary issue for sustainable fishing is the amount of effort applied in relation to the productivity of the fish populations, he said.

"In South Africa, our industrial fisheries are relatively well-managed, our inshore fisheries are not. If this is not addressed, I fear that we could easily find ourselves in a situation as dire as some of those described in the film. We need to consider cheap and robust mechanisms to protect our incredible diversity of fishes."

Dr Samantha Petersen, manager of the WWF Sustainable Fisheries Programme, said South Africa has a history of responsible management of offshore commercial fishing. And the country has good information on which to base its management decisions.

"We have the knowledge, we have the resources to effectively manage our fisheries resources, and we just need incentives to do so."