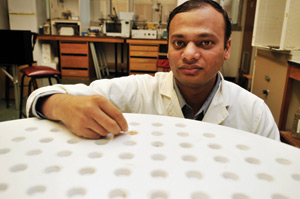 Could turmeric be used to treat conditions such as Alzheimer's disease and HIV dementia? According to Amod Kulkarni, a postdoctoral fellow in the Department of Human Biology at UCT, there may be a link.

Kulkarni is breaking new ground in developing an effective combination treatment for conditions such as Alzheimer's disease, HIV dementia, and other neurological disorders, and has been researching the delivery of Vaccinia Virus Complement Control Protein (VCP) and Curcumin to the Rodent Brain. He found that VCP, tVCP (a derivative of VCP) and curcumin, the component that gives the Indian spice turmeric its brilliant orange colour, treated some of the symptoms of Alzheimer's disease in a transgenic mouse model carrying the abnormal genes responsible for this illness. Interestingly, India has a significantly low incidence of Alzheimer's Disease. Kulkarni, who hails from Akola, a small city near Mumbai in India, said that though there may be a link, one would have to ingest substantial quantities of the spice for it to have some therapeutic effect.

His findings may nevertheless open the door to further investigation that could enhance our understanding and treatment of the disease.