Tapping into the secrets of plants

Jill Farrant, holder of a research chair in plant molecular physiology in UCT's Department of Molecular and Cellular Biology and UCT's first woman A-rated scientist, is finding out how the secrets of drought-resistant plants can be tapped to boost agriculture in drought areas. 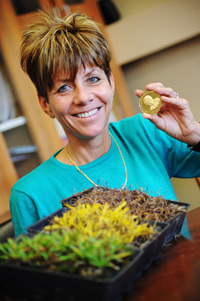 Jill Farrant's work on droughttolerant plants is winning her accolades, left, right and centre. Earlier this year, she was the winner of the Harry Oppenheimer Fellowship Award, and in August was named the Distinguished Woman Scientist in the Life Sciences in the South African Women in Science Awards (WISA). The latter awards are made annually by the Department of Science and Technology during Women's Month, to recognise and create incentives for women scientists and researchers, and to create role models for young women and girls.

Farrant, of the Department of Molecular and Cellular Biology, was singled out for her work on droughttolerant plants, her research and publication track record, and her national and international standing. Also mentioned was the Equity Development Programme she runs to source funding for black and women students.

"Two awards in one year is a huge gift," she says. "This is by no means a singular effort. I celebrate by honouring the people - collaborators, students, and my wonderfully supportive partner and family who have helped make this possible."

Part of the reason that Farrant is lauded by the scientific bodies is because the work she is engaged in has massive potential to improve the lives of millions of people. If water stress is the Achilles heel of agriculture and climate change is just tightening the screws, it's a good thing that scientists like Farrant, are "working on the right thing at the right time".

The right thing, says Farrant, is plants known as 'resurrection plants', so called because they can withstand prolonged periods of near-total water loss by appearing to die. But, at the addition of a few precious drops of H2O, they spring back to life.

For some years Farrant has dedicated herself to finding out how these plants are able to play possum like this. And if she can coax other plants - and crops - to do the same. That work received a timely boost - other funds were drying up - when Farrant was named the winner of the prestigious Harry Oppenheimer Fellowship Award for 2009, which supports work that advances knowledge, teaching, research and development in South Africa. The generous â‚¬100 000 purse (around R950 000) - and an eye-catching gold medal that comes with the award - will go a long way to keeping Farrant and her small squad of postgraduates in plants and pipettes. All the way to the labs of some leading scientists in Switzerland and Italy, in fact.

At the Institute of Plant Biology at the University of Zurich, Farrant has spent time with "old-school perfectionist" Professor Felix Keller, who will now help her pinpoint the exact roles played by the sucrose and the raffinose family oligosaccharides (sugars) that protect the plants in their wilted states, and then fuel their recovery when they rehydrate.

Later, she'll join Dr Francesco Loreto of the National Research Council in Rome. Loreto has the technology that allows him to identify, (even in infinitesimal traces) a group of molecules known as lipid volatiles. It's been found that these lipids play a key role in what's known as lipid-based signalling pathways, triggered by stress signals such as drought. Farrant wants to unpack these pathways, which probably switch on the dormant genes that make resurrection plants so drought-tolerant.

While she's not opposed to the genetic modification of crops, she believes that these triggers and pathways and genes offer a more "natural" way to protect crops. "All crops have these genes," says Farrant. "They just never switch them on." It's the mechanisms used by resurrection plants, including the ones she's discovered on Table Mountain, that Farrant wants to tease out of other plants and crops.

Crops like Eragrostis tef, a tiny but high-protein seed that forms the basis for breads and cereals in Ethiopia and Eritrea, and is also digestible by the growing number of people with gluten intolerance. Tef is closely related to the resurrection grass Eragrostis nindensis, so is crying out for scrutiny.

"For me, to make a drought-tolerant crop out of tef is a priority," says Farrant. "It's got to happen."

Joining Farrant as winners in the Women in Science Awards were Karen Sliwa-Hahnle, professor of cardiovascular research at UCT and director of the Hatter Cardiovascular Research Institute, and Dr Floretta Boonzaier from the Department of Psychology.

Sliwa-Hahnle was runner-up to Farrant in the Life Sciences category and was honoured for her "substantial" contribution to the understanding of the causes and treatment of unexplained heart failure in pregnancy (a condition that affects one in 1 000 women in Africa following childbirth).

Boonzaier was runner-up in the Social Sciences category and was recognised for her work in the Department of Psychology on the "construction of subjectivities" in relation to violence in intimate heterosexual relationships.