How the botanical David took over the world from the Goliaths 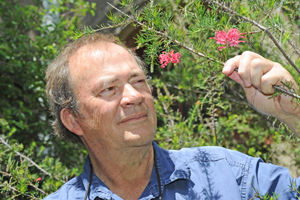 Fiery flowers: In a new paper, Prof William Bond and a UK colleague argue that fires and dinosaurs can explain how flowering plants came to be prolific.

Today, flowering plants rule the world. A new paper suggests that a hundred or so million years ago, it was fire that first gave these weedy plants the upper hand over their taller counterparts.

Documentarians, artists and moviemakers like to portray the Cretaceous period, described as the heyday of dinosaurs, as a veritable Garden of Eden - a swampy landmass teeming with lush, tropical forests.

(Do a Google image search for 'Cretaceous', and see.)

But this may be far from the truth, suggests a bold new paper, Fire and the Spread of Flowering Plants in the Cretaceous, by Professor William Bond of UCT's Department of Botany and Professor Andrew Scott of the Department of Earth Sciences, Royal Holloway at the University of London in the UK. Rather, the authors say in the paper that has appeared in the journal New Phytologist, conditions in the Cretaceous - 120 to 65 million years ago - were such that wildfires and the ham-footed behemoths that ruled the world would have been the dominant forces shaping the landscape.

They've tabled a catalogue of conditions that would have predisposed the Cretaceous to plenty of fires. There were high temperatures, a seasonally dry climate, high levels of oxygen (making up of 25% of the atmosphere, compared to the 21% of today) and, as a result, a greater likelihood of lightning-sparked fires. Further proof that fires were common during the Cretaceous is the many samples of charcoaled flower fossils, dating back to that period, that have been found.

So instead of a world overrun by dense forests with high trees and vines, the ecosystem would more than likely have been typified by open, shrubby vegetation, akin to the fynbos or savanna of today. If you think about it, says Bond, if this was indeed the golden age of dinosaurs as well, it doesn't hold that these bulky and clunky creatures would have been able to negotiate their way through thick forests. A flat, scrubby terrain would have been more likely.

"If we're right, then it was a very different world from the one we thought it was," says Bond.

This would also answer another puzzle. How it came to be that flowering plants, 'weeds' that first appeared around 135 million years ago, would have overrun the ruling conifer-like trees known as gymnosperms.

In their paper, Bond and Scott argue that the fiery conditions would have made a fertile breeding ground for smaller flowering plants, aka angiosperms. For one thing, angiosperms thrive in open, sunlit habitats, typical after a fire. And "frequent surface fires also favour low-stature plants that can recover quickly after a burn", they write.

Angiosperms also had many new adaptations counting in their favour - they were highly productive, thanks in large part to a highly efficient conducting system for delivering water to the leaves, and were able to regenerate swiftly after a fire (compared to the slow-sprouting conifers).

Bond expects some comeback from the article. For example, nearly all the evidence for the fire hypothesis hails from the Northern Hemisphere, so there are question marks around extrapolating these to conditions in the Southern Hemisphere.

But Bond is confident the paper's claims can be backed up by his own studies on the roles of fire and large mammals on the environment, even though his work concentrates on contemporary times and contemporary animals such as elephants.

"Fires and big mammals can really help shape the world," he says. "But when they go extinct, people forget about them."

The new paper, however, may be a timely reminder.