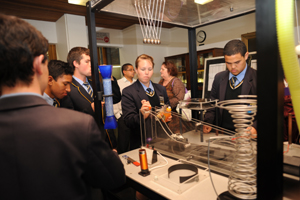 It was show-and-tell time for the Department of Physics on 28 October when over 300 Grade 11 pupils from 30 of the Peninsula's high schools converged on UCT on 28 October for the annual Phenomenal Physics afternoon.

Dr Spencer Wheaton, of the Department of Physics commented that the afternoon is about showing, rather than explaining or talking about physics. The show is action packed with hands-on experiments and demonstrations geared to inspire learners.

The physics department staff thoroughly enjoyed this year's Phenomenal Physics and said it was one of the most successful and well attended and that the students were particularly responsive and engaged with them wholeheartedly. Some new demonstrations were introduced this year and new, modern equipment was used, reflecting that the UCT Physics department is well equipped and keeps ahead of modern technology.

During a break between sessions, the learners were provided with doughnuts and a cooldrink, courtesy of UCT Admissions.

All the demonstrations required the students to make predictions before being shown the demo, and the presenters asked the learners to think about the explanations afterwards. The rest of the afternoon demonstrated some physics and phenomena (not in the school curriculum) that highlighted the underlying presence of physics principles in our everyday lives - waves (sound and light), fluid mechanics, electricity, magnetism and the physics of cryogenics. The physics department and their presenters hope that learners left the event with a greater appreciation of physics as a science and the centuries of study and development of theories and technologies that impact on our daily lives, and hence that physics, is an exciting and relevant academic pursuit.