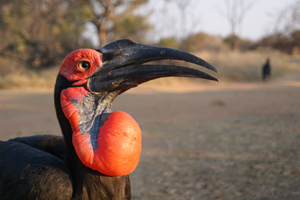 Few and far between: The Southern Ground-Hornbill (Bucorvus leadbeateri) has decreased in numbers during the 20th century, spawning an extensive conservative project. Photo by Kate Meares.

UCT's Percy FitzPatrick Institute and Dow Southern Africa (Pty) Ltd are both celebrating their 50th Anniversaries this year. More great news is that Dow has committed a further R500 000 to the Dow Ground-Hornbill Project which brings their support for the project to R1.5 million over the past seven years.

During the course of the 20th Century, the range and population size of the Southern Ground-Hornbill (Bucorvus leadbeateri) in South Africa decreased by two-thirds, with the birds disappearing from much of their historical range.

The Dow Ground-Hornbill Project aims to gain a scientific understanding of the causes of those local extinctions, assess environmental conditions that promote successful breeding, and use this knowledge to identify areas previously occupied by ground-hornbills that are now suitable for their reintroduction.

The study is based at the institute's 180 000 ha lowveld study site at the Associated Private Nature Reserves adjacent to the Kruger National Park. The study will thus help to generate an increase in the iconic Southern Ground-Hornbill population and an expansion back into as much of its historical range as possible.