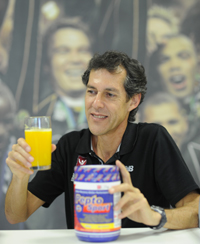 Drink up: Assoc Prof Andrew Bosch and PeptoSport, a sports drink that he developed through his work at UCT.

Even in the productive health sciences, years of toil in a lab very rarely makes it into a commercial product. Now UCT's Associate Professor Andrew Bosch has become one of the few to see that happen, thanks to a new protein-based muscle-recovery product known as PeptoSport.

The drink - it comes in powder form that has to be mixed with water - spills out of Bosch's work with athletes, elite and otherwise, at the UCT/ Medical Research Council Research Unit for Exercise Science and Sports Medicine (ESSM), and an enduring research interest in the roles of carbohydrates and protein in sports performance. Not one to merely scratch the surface, Bosch has spent years delving into the physiology and biochemistry that underpins that relationship.

His labour has now been applied to PeptoSport, a muscle-recovery drink manufactured by DSM Nutritional Products South Africa as part of its Pepto range. That two-syllabled brand prefix also hints at the x-factor ingredient in the drink.

Other than having to strike a distinctive balance between the respective amounts of carbs and proteins in the drink, Bosch also included a particular type of protein known as protein hydrolysate in his formulation. His cocktail was specifically developed for a research project investigating muscle recovery from hard training.

Protein hydrolysate - or PeptoPro, as the DSM-trademarked ingredient is known - is a protein that has been broken down into strings of amino acids (protein's building blocks) in a process known as hydrolysis. These bonded amino acids are also known as peptides. (Peptides, Pepto - get it?)

Other studies have shown that protein hydrolysates, unlike intact proteins normally found in food, require no digestion and so are absorbed directly into the blood. That is one of the reasons they may outperform more complex proteins in enhancing the muscle recovery process, explains Bosch. 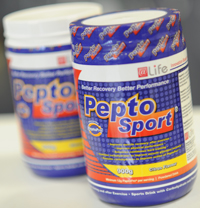 But the literature has as yet not shown conclusively that protein hydrolysate improves sports performance. Especially among elite athletes who, trained to the hilt, have very little margin for improvement.

"So it's quite a big ask to get anything else to have a further positive effect," says Bosch.

He was fortunate enough, however, to be able to put his protein mixture through a litmus test. In early 2009 he and his team ran a study with the Springbok Rugby Sevens, who had volunteered their services and bodies to the ESSM, at a training camp in Stellenbosch.

Using muscle soreness and fatigue as a marker for recovery - the players had to complete elaborate questionnaires - Bosch was able to show that, yes, even among such fine-fettled athletes, protein hydrolysates did improve post-training recovery, particularly in the quadriceps and calf muscles.

Bosch had acquired his peptides from DSM, a global producer PeptoPro. Following his good results with the Springbok Sevens, DSM was keen to join forces with UCT to produce and market the drink, and the two groups recently signed a licensing agreement.

UCT's Research Contracts and IP Services (RCIPS) licensed the formulation developed by Bosch to DSM on an exclusive basis for commercial use. PeptoSport's market success will earn royalty revenue for UCT, and will be used to reward the inventor and fund further research at ESSM, says Dr Andrew Bailey, intellectual-property manager at RCIPS.

"We're having such great results with this product amongst top athletes and teams," says Heidi-Lee Robertson, new-business development manager with DSM.

Good news for athletes, reports Robertson, is that PeptoSport has been registered with Informed Sport, a screening programme of the UK-based HFL Sport Science laboratories that checks for the presence of banned substances in sports supplements.

For Bosch, the drink is an out-of-the-ordinary return on his work.

"Most of the time," he says, "the research end up as a paper in a journal, so actually seeing a product on a shelf is kind of novel."