Shining a light on African bats 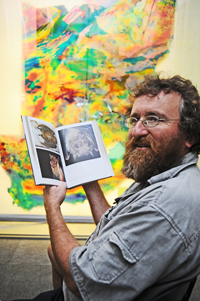 Batman: Dr Fenton 'Woody' Cotterill is the co-author of Bats of Southern and Central Africa: A biogeographic and taxonomic synthesis.

Cotterill is the Eranda Research Fellow at the Africa Earth Observa-tory Network, and a researcher at UCT's Department of Geological Sciences and Department of Molecular and Cell Biology.

"This is a UCT product," says Cotterill. "Over five years of my work on the book has been from here."

It's a full-colour book, packed with information, including topics such as evolution, ecology and echolocation, and it accounts for the 116 known bat species in southern and central Africa.

Photographs of the bats, including their skulls and dentition, and spectrograms - accurate time-expanded echolocation 'maps' - illustrate each account.

"Bats of Southern and Central Africa contains an extraordinary wealth of information" says field biologist Steven Goodman of the Field Museum of Natural History in the US.

"It is a synthesis of over a century of research, and the authors - some of the foremost scientists in the study of African bats - have done an exceptional job in making this information available to natural historians, bat enthusiasts, and scientists alike. The text reflects their intimate knowledge of these animals in the field and their detailed studies of specimens in museums around the world."