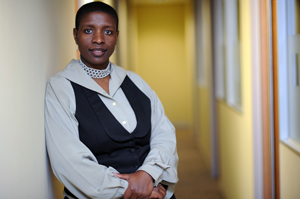 Zetu Makamandela-Mguqulwa has been appointed to the newly created position of Ombud at UCT, taking office on 1 January 2011. A university Ombud - a position vice-chancellor Dr Max Price has touted since his installation - is a designated neutral or impartial dispute resolution practitioner, whose major function is to provide confidential and informal assistance to members of the university community, including students and staff. The role of the Ombud, said a recent announcement by the chair of Council, Archbishop Njongonkulu Ndungane, has a long and honorable tradition as a safeguard against abuse, bias and other improper treatment or unfairness. The Ombud deliberately assumes a neutral position with respect to the individual as well as to the university. In this position, Makamandela-Mguqulwa will be "an advocate for fairness", acting as a source of information and referral; aiding in answering an individual's questions; and assisting in the resolution of concerns and critical situations. The office of the Ombud supplements, but does not replace, the university's existing resources for conflict resolution.

A four-time UCT graduate, Makamandela-Mguqulwa returns to the university with plenty of experience in the field of conflict resolution and transformation. From 2003 to 2006, for example, she served as transformation co-ordinator in the Faculty of Health Sciences here at UCT. Makamandela-Mguqulwa specialises in facilitating change in organisations and in how people think about themselves in relation to their circumstances. Currently she is a change-management specialist at oil company PetroSA, where she provides counsel on transformation and change at all levels, including to company executives.

Monday Paper spoke to her briefly.

Monday Paper: How do you see the role that'll you play as Ombud?

Zetu Makamandela-Mguqulwa: Someone will come to the Ombud when they decide that they don't want follow the formal route around an issue, that they'd rather have it dealt with informally, they'd rather have a conversation. But even though it's informal, what I like about it is that the end result will influence the identity of the university - things that we hold as true. It might also influence policy, or lead us to rethink some of our values. I think the university is going out of its way to exercise fairness, and fairness is what it's all about. It's a quality I hold very close to my heart. It took many years for me to understand that fairness is not an attitude, but a professional skill that is acquired over time, and it needs to be exercised and developed.

MP: You're familiar with how UCT works, so how do you think the university structure - different, perhaps, from a top-down corporate structure - will influence how conflict will be resolved?

MP: Some would argue that people with grievances, specifically around transformation, have plenty of avenues and structures they can follow or turn to, but then don't. How do you hope to encourage people, some who are perhaps still scared of victimisation, to turn to the Ombud if they have issues?

ZM-M: It's about those safe spaces. People must understand why the position is there, and understand the quality of the intent of the university. That quality will show through the results, and those results can only be achieved if people take advantage of the services of the office, and really learn to find their voices.

MP: What about the job appeals to you?

ZM-M: This will be my third time back at UCT. And I have seen, with a lot of appreciation, the attempts that the university has embarked on and is moving forward with in terms of integration, and in being open as an institution that welcomes all South Africans. Having worked on transformation at UCT before, I really see this as the ultimate attempt to actually realise the dream of being open, of being a changing and learning institution. And I can only be humbled to be selected as the person to be instrumental in having the university achieve that.