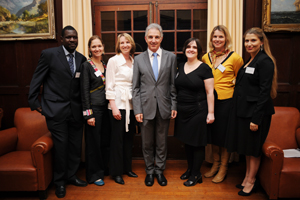 If being inducted into the ranks of UCT Research Fellows is a mark of scholarly stature, then perhaps Professor Dan Stein's research-minded responses to all of Monday Paper's questions - no matter what that question - on being named one of two new UCT Fellows for 2010 is understandable.

The interview, conducted at the College of Fellows' Annual Dinner on 14 October, went something like this.

Monday Paper: "What does it mean to you to be elected a UCT Research Fellow?"

Stein: "Brain-behaviour research is so exciting; it would be wonderful if more students and more postdoctoral and clinical research fellows became involved in this area."

MP: (Flustered but resolute.) "Do you feel honoured at being named a UCT Research Fellow?"

Stein: "We are fortunate that in Cape Town, brain-behaviour students and fellows now have access to state of the art neuroimaging and neurogenetics facilities."

MP: (Reaching by now.) "What do you think of the table setting?"

Stein: "Psychiatric disorders are now the third-largest contributor to our national burden of disease; we really need to advance basic and clinical research in order to make a difference."

The responses, it could be argued, were in keeping with an occasion where scholars and scholarship took pride of place. Stein and Professor Timothy Egan were joining 43 other fellows - there are also 12 Sometime Fellows and 63 Life Fellows - on UCT's College of Fellows, which brings together academics singled out for original and distinguished academic work.

An A-rated scientist, Stein, head of the Department of Psychiatry and Mental Health and director of the Brain-Behaviour Initiative, a UCT signature research theme, has been hailed for his contributions to the study of the psychobiology of anxiety disorders. Stein collaborates widely in his attempts to develop integrative approaches to these conditions; his publications include work with neuroscientists, brain imagers, neurogeneticists, neuropsychologists, epidemiologists and philosophers.

(Stein's wife, Professor Heather Zar - pictured below with her husband and Dr Max Price- was named a fellow in 2007.) 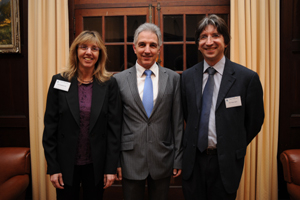 Likewise Egan, of the Department of Chemistry, is a much-cited authority in the study of the bio-inorganic chemistry of the malaria parasite. His original paper on haemozoin - or malaria pigment - and its role in the development of malaria ranks among the 10 most cited papers on the subject, and his work has prompted renewed interest in haemozoin. As such, his research has influenced pharmacology, medicinal chemistry and biochemistry, among other fields.

Stein, for one, believes his field is still flush with opportunities. Thus his repeated rallying cry for more research and researchers.

"I'd really encourage students to consider working on brain-behaviour studies; this is an immensely exciting interdisciplinary area, and so relevant to the challenges facing the country."

(Monday Paper could unfortunately not reach Professor Timothy Egan for comment as he is on sabbatical.)