Squash team is a handful 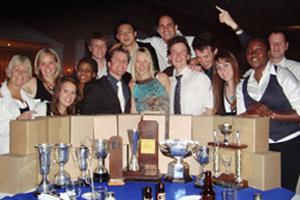 The UCT Squash Club literally had their hands full at 2010 Western Province Squash awards ceremony, walking away with no fewer than eight trophies.

Five of these were for league wins. Of the 12 UCT sides competing in WP competitions, men's teams finished top of the crop in the third, seventh, 11th and 15th leagues, while the UCT B-team won the women's third league.

In addition, the men's G-side won the RMS Cup for their victory in the knock-out competition for teams in the 11th and 12th leagues. UCT C, competing in the third league, then received the Ohlssons Trophy for best league performance by a team in the men's leagues one to eight.

The cherry on the top, though, was the Clive Corder Trophy, picked up by UCT for the best overall performance by a club in the men's competitions. This was the club's second consecutive Clive Corder Trophy. (The UCT women finished third overall so missed out on the Carollyn Guthrie Trophy, which went to Welgemoed.)

UCT's good showing is a boon to the sport in the province, given its largely youthful make-up, says WP Squash's Glenda Erasmus.

"The university has really become our breeding ground for squash."