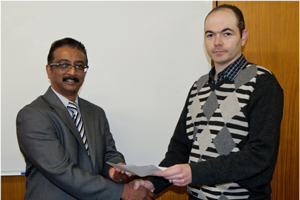 The award of the Pauline Hall Book Prize to Dr Michael Locketz of the Division of Anatomical Pathology at UCT is fitting in many ways.

It was, firstly, the late Professor Pauline Hall who stimulated Locketz's interest in both liver pathology and research, and who would supervise the initial laboratory phase of his MMed dissertation - which won him the award - prior to her return to Australia in 2005, where she died in 2007.

"Professor Hall was an inspiring mentor to many registrars," Locketz said. "Her enthusiasm for liver disease in particular, and research in general, was infectious." The accolade is given to a best postgraduate research project in liver pathology, but only when a worthy candidate has been nominated. (It has not been awarded for the past few years).

This comprehensive documentation of the occurance of fibrolamellar carcinoma in South Africa was the first of its kind.