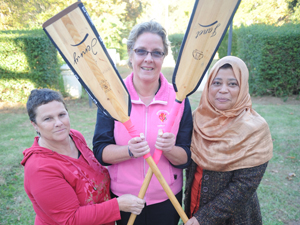 Taking on the creek: Breast cancer survivor Janet Butler, Jennifer Heunis and Waleda Salie have found friendship and fitness aboard a dragon boat.

Jennifer Heunis and Waleda Salie have been paddling for Amabele Belles, a Cape Town-based dragon boat racing team made up of breast cancer survivors like themselves. A third staff member, Janet Butler, is still part of the team but has had to withdraw from paddling for now.

Amabele Belles was established in 2006 after dragon-boater Pam Newby heard of "pink ladies" (so-called because of their distinctive kit) in other countries, and convinced seven other women to launch the initiative. The group - a self-titled "floating support group", according to Heunis - is now up to about 45 women.

Salie, of the Department of Accounting, first heard of the team while undergoing chemotherapy at UCT Academic Hospital in 2007, and joined the club in August last year. Spurred on by her husband she's thrown herself into the paddling over the past year.

"I take it very seriously," she says. "And I enjoy it - I enjoy talking to the other women, and just doing this together with them."

A founding member of the Belles and now one of the more seasoned paddlers on the crew, Heunis was able to join the Belles team that travelled to Ontario, Canada, for the third International Dragon Boat Festival in June.

Hosted by the International Breast Cancer Paddler's Commission, the festival brought together 73 teams from across the world.

Thanks to the FIFA 2010 World Cup then on and their distinctive African team colours, the team - vuvuzelas held aloft - drew plenty of crowd and media attention in Canada. They were even able to raise Canadian $400 by selling their kit, and will invest that money into projects.

"We were a hit," Heunis reports.

And with October being Breast Cancer Awareness Month, the women will be kept busy. There are practice sessions, a regatta or two, and they're welcoming the women finishing the Journey of Hope Breast Cancer Ride on Harley-Davidsons.

The UCT women are keen for others to join. Or just to come watch a practice session at the V&A Waterfront. Not only do women improve their fitness and strength - essential after therapy or surgery - but the team also offers support, camaraderie and a whole lot of fun, says Heunis. "People tell us we look so happy." (The team practices twice a week at the V&A Waterfront, at 18h00 on Wednesdays and 09h30 on Saturdays. Participants of any level of fitness can join.)

For Butler, of the Department of Geological Sciences, the Belles was something of an eye-opener. "I never thought that I'd be able to do something like that after cancer, but it's such a great feeling to be out there and physical," she says.

"It just lifted me to be able to do this."