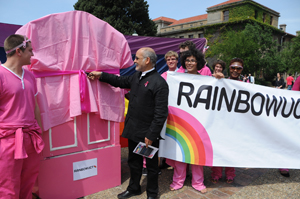 Flowers were laid at the remains of the Closet last week, following the fire that damaged the structure. The Closet was installed in front of the Jameson Hall by RainbowUCT, a student organisation promoting sexual diversity and human rights, on 4 October 2010, to launch Pink Week.

The gesture commemorated those who have died in the struggle for sexual diversity.

The university has launched an investigation into the incident.

UCT students and staff members had been encouraged to write graffiti on the sides of the pink box, called the Closet, to express their attitudes about sexual diversity. 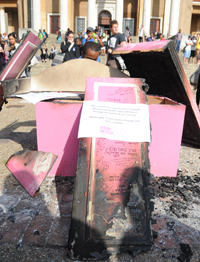 Following the fire, vice-chancellor Dr Max Price said: "One would have hoped that the rights of LGBTIQ (lesbian, gay, bisexual, transgender, intersex, queer) people are accepted and one need only celebrate that right, rather than still fight for it. However, it seems there are still people who do not acknowledge some rights embedded in our Constitution, and that we definitely still have a lot of work to do to in this regard."

He added: "It is regrettable that this has happened. The 'closet' structure is meant to allow people to express their opinions by writing on it. The idea is precisely to encourage debate. It is regrettable that those who are responsible for burning it did not have the courage to express their opinions in an open and less destructive way. I know the UCT staff and students celebrating Pink Week will not let this incident spoil their important efforts."

After cutting the ribbon to launch the Closet, deputy vice-chancellor Professor Crain Soudien added his own message: "All of us. Without exception!"

RainbowUCT chair Dylan van Vuuren had said UCT was considered a safe haven for LGTBIQ people. The Closet, he said, had been intended to celebrate the country's achievements in advancing civil rights for homosexuals and to highlight the human rights violations that still plague society.