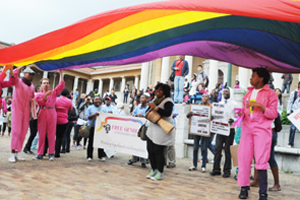 This follows the torching of the group's display Closet three days earlier on Jammie Plaza, which was part of its Pink Week campaign, an initiative intended to promote LGBTI rights and highlight "homoprejudice" across the country.

In its memorandum, which was accepted by deputy vice-chancellor Professor Crain Soudien, Rainbow UCT said the incident was not only a homophobic hate crime, but a blatant infringement of the human rights to freedom of belief, opinion and expression.

"The burning of the closet serves as a wake-up call to students and faculty alike that the homophobia their fellow LGBTI students face is real and threatening," the memorandum reads.

The group requested the management to launch an official enquiry on the burning of the closet; to take the necessary and effective steps to combat homophobia in the student body at UCT including, but not limited to, extensive LGBTI - sensitivity training in residence and orientation programmes; to punish the perpetrators, if caught, not with expulsion, but with community service and a public apology; to investigate Campus Protection Services' slow response; and to create a safe space for LGBTI students in the form of an office.

Meanwhile, Pink Week has so far gone ahead as planned. Events included a Sexual Health Campaign at which a number of prominent LGBTI organisations exhibited their services to create awareness, a Gay Day event, and a screening of a documentary on homosexuality.