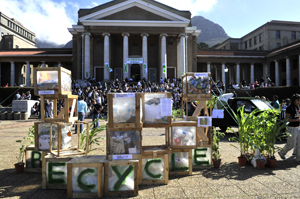 The annual UCT Green Week ran from 20 to 24 September. Led by the student-run Green Campus Initiative (GCI), it is a dynamic and informative week that highlights 'green' issues on campus.

As in previous years, the week kicked off with 'greening' the website - a dramatic way to make students and staff members aware of the Green Week initiative.

The GCI took over upper campus and hosted a variety of talks and screenings. This included the launch of Ridelink - a free carpooling service for the UCT community that works by matching users according to their travel schedules and routes. Hosted on Vula, Ridelink can be accessed by anyone with a UCT student or staff number.

Other events included a Green Expo in Jameson Hall on Tuesday, 21 September,as well as a series of daily talks such as a panel discussion on GM food: Environmental hazard, or an end to world hunger? on Tuesday, and a debate on nuclear power in South Africa on Wednesday 23 September.

There were also screenings at the Labia cinema every evening.

View the Ridelink promotional video as well as the "How many can fit into a Beetle" competition on our YouTube channel.