How to get along with baboons 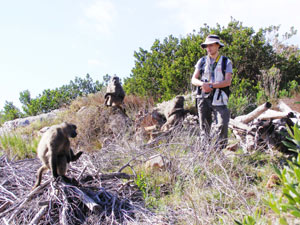 It may be called "baboon management", but PhD researcher Bentley Kaplan of UCT's Department of Zoology says that people management is the most problematic component of the job.

"Baboons are pretty easy to manage," he says. "People are far more difficult."

Kaplan hopes that ultimately his PhD will produce a holistic strategy for managing people, baboons and waste side by side to minimise baboon invasions into human areas.

The starting point was a behavioural study conducted in Namibia, which examined how feeding shaped leadership in baboon groups. Researchers found that if they provided a small amount of food to the leader, he would lead the pack to wherever he was fed. In other words, the boss could be bribed.

Marrying behavioural research with conservation, Kaplan's first experiments were to use the Namibian method to lead baboon packs away from populated areas in the surrounds of Simon's Town. The month-long experiment was a success. Feeding baboons, or provisioning, is a controversial practice, and Kaplan is quick to point out that this is a short-term solution.

He explains that the method could be a cost-effective alternative to monitoring - following baboons wherever they go - especially for smaller troops.

"Employing monitors is very costly as well as controversial," says Kaplan, "so I'm trying to find methods that will either compliment the monitors, or replace them where possible with cheaper options which don't affect baboon behaviour, as monitoring does."

But ultimately, the solution for a harmonious cohabitation primarily lies with changing the perceptions and behaviour of the endangered Cape baboons' less hairy neighbours.

Kaplan explains that baboons don't actually like humans very much - it's just the food they're after.

"Human food is very appealing to them," he says "It's nutritious, easy to digest, and raiding is quicker and easier than finding food in the wild."

A side effect of baboon raids is vandalism and crop loss in the area's vineyard - which has resulted in aggressive reactions from disgruntled residents. Baboons have been shot, poisoned and hit by cars, despite their habit of avoiding physical conflict wherever possible. Their shows of aggression, explains Kaplan, are usually exactly that and nothing more.

"Residents need to minimise the appeal of urban areas by locking their bins, removing their fruit trees and compost heaps, and keeping food out of sight," Kaplan advises. "They can ignore this, but then they shouldn't be too surprised when baboons raid and vandalise their homes."

Kaplan believes in baby steps to a solution. "I think a better strategy will come through incremental improvements," he says. "I know that people want a single decisive solution, but that's not going to happen."